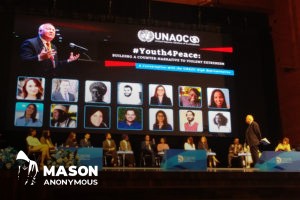 “Youth engagement has become a crucial factor in the global efforts to prevent violent extremism and to build sustainable peace”, said the moderator, Miguel Moratinos, the High Representative of the United Nations Alliance of Civilizations (UNAOC), moderator of the event.

“They are not only our present, but our hope for the future,” he stated.

With a focus on education and intercultural and interfaith dialogue, Youth4Peace: Building a Counter-Narrative to Violent Extremism featured panelists of diverse backgrounds sharing how their work is making a difference, ensuring that young people’s voices are being heard at the policy level so that youth are seen as champions of change, not just victims or perpetrators of violence.

‘Better to light a candle than to curse the darkness’

From France, astrophysicist Fatoumata Kebe said she had founded Ephemerides, a programme that provides astronomy classes for high school students from disadvantaged background.  Although she has worked with NASA, her heart lies in teaching math, physics and chemistry to girls in Mali.

“Only 30 per cent of them have the opportunity to attend school and there, they are not offered science, so I teach them about the solar system”, she said.

She also teaches astronomy to marginalized youth in Paris, including by taking them to meet with staff in the aerospace field.

And we're live! #UNAOC Chief of Cabinet and Spokesperson @nsaad777 opens our panel on “#Youth4Peace: Building a Counter-Narrative to Violent Extremism” with #UNAOC alumni in Baku. Watch it live! https://t.co/lknkqd1AS7 #WFID #Commit2Dialogue pic.twitter.com/5bdpCYR0AU

“My father was a police officer whose life was darkened by violence”, he said, noting that in his native Peru, victims of violence are given education rather than monetary reparations.

He took to heart his father’s wisdom that it was better to light a candle rather than curse the darkness, saying “When we educate, we empower victims of violence and turn on a lighthouse for a whole community”.

Meanwhile, Liyanaarachchige Neluni Tillekeratne, Co-National Director of Sri Lanka Unites, explained that after the civil war in the north, her country tried to reconcile all communities.

“A youth movement was set up 10 years ago as war ended”, she said and since that time, it has “turned thousands of youth into peacebuilders” by implementing cross- and inter-cultural ideologies to create meaningful relations and friendships “across ethnic and religious lines”.

After the recent violence in Sri Lanka, in which suspected terrorists detonated suicide bombs on Easter Sunday and killed more than 250 people at churches and hotels across three cities, Liyanaarachchige said: “Thousands of our youth stood up and said violence has no place in Sri Lanka and we are now setting up a culture of peace”.

Sara Zaini, Co-Founder and Director of School and Content Development for Emkan Education underscored the importance of early education.

“We were not pleased with the education our children in Saudi Arabia were receiving”, she asserted. “We wanted to give them better opportunities, so almost five years ago, we started a programme to become agents of change there”.

Sara elaborated on implementing the Swedish approach of Kunskapsskolan, where through a portal, students collaborate and work with people and ideas from other countries, cultures and languages.

“This helps to teach critical thinking and offers a platform to engage with counterparts around the world, she said, urging others to “embed change you desire in your community”.

‘Engage and listen to youth on their own terms’

In a side event on youth engagement and vocational training, Sevil Alirzayeva, Chief of Staff at the UN Office of Counter-Terrorism (UNOCT), spoke about the alarming rise in hate speech, xenophobia and other forms of bigotry.

“The international community must stay united and cannot relent in its efforts to prevent and counter terrorism in all its forms and manifestations”, she affirmed.

Noting that today nearly half the world’s population is 24 years-old or younger, Ms. Alirzayeva stated that UNOCT prioritizes engaging and empowering youth in the context of counter-terrorism, “especially preventing and countering violent extremism”.

Because young people are affected by terrorism in multiple ways, from being targeted by terrorist propaganda and preyed upon by recruiters to becoming collateral victims of attacks and suffering direct and indirect political, social and economic cost and consequences of terrorism on their communities and societies, she said that they have as much, if not more, of a stake in counter-terrorism, and “we need to engage them more effectively and sincerely”.

“We need to engage youth as partners in building resilience, as positive change-makers, because young women and girls, young men and boys, are central to creating a safer, more inclusive and prosperous world”, she stated.

“If we want to counter the manipulative messages of terrorists to lure young people, we have to engage and listen to them on their terms”.

Speaking on behalf of the UN Educational, Scientific and Cultural Organization (UNESCO), Nada Al-Nashif, Assistant Director-General for Social and Human Sciences stressed the importance of fostering youth participation in decision-making and in processes for ensuring peace and security.

Noting that violence, discrimination, hate speech and violent extremism threatens the fundamental rights of citizens all over the world, she said that one of the reasons violent extremism persists is that “youth have been excluded from decision-making processes and have had little opportunity for civic engagement”.

“We must, therefore, provide our youth with the opportunities, and support needed to develop the skills and capacities necessary to overcome the push and pull factors towards violent extremism”, she asserted.

“Sustainable peace requires an inclusive approach to create an environment where youth feel included and engaged as change-makers.”

Nihal Saad, Chief of Cabinet and Spokesperson for the High Representative, UNAOC said the Alliance considers young people essential partners in “fostering mutual understanding between peoples of different cultures and religions, highlighting the will of the majority to reject violent extremism and embrace diversity”.

“UNOAC has a strong focus on youth-led preventative actions”, she said, noting several examples, including by leveraging new technology.

“Young media makers are encouraged to create content on issues related to migration, diversity and social inclusion for the PLURAL+ Youth Video Festival”, Ms. Saad gave as just one example. Launched in 2009, UNOC and the International Organization for Migration (IOM) work with a network of more than 50 partner organizations globally to empower youth to explore pressing social issues.

According to Farid Jafarov, Executive Director of Azerbaijan Youth Foundation, “the most widespread form of terrorism in the modern world is nationalism and religious terrorism”.