Clarence Martin, the son of a crop-sharer and carpenter, opened Martin Accordions in Lafayette, Louisiana after giving up working as a building site contractor. The company, where his son and daughter also work, makes, repairs and tunes accordions.

ILO Photo/John Isaac
Clarence Martin (left) talks to a customer whose accordion he has repaired.

“I used to be a residential contractor and cabinet maker, but 37 years ago decided, after my body started giving out on me, that I needed a new job. My wife had bought me an accordion and I took it all apart to see how it was made. After rebuilding it, I decided that’s what I wanted to do with my life.

It’s a pleasure and an honour to make accordions. This has been the most rewarding job I have had; I’ve never had so much fun in my whole life. – Clarence Martin

I measured the accordion and documented every part and then my son drafted the designs for those pieces on his computer, so I had plans to work from.

I started making melodeon accordions which originated in Germany. They are called Cajun accordions in Louisiana. We made 50 in the first year and after three years we were a major manufacturer here in Louisiana and now in a busy year, we can make over 200.

We were only three people. It’s difficult to teach people to make accordions, as it just takes too much time. If you mess up one little thing, you have to throw away the accordion and start again. I’ve seen an accordion which didn’t turn out well end up in the BBQ pit; it sounded so bad.

I still work 10-12 hours a day. I can never get enough of this work; I’ve always been a workaholic and now my daughter is the same. She used to come into the workshop after school and said she would like to help out. It’s a lot of fun for us to work as a family. 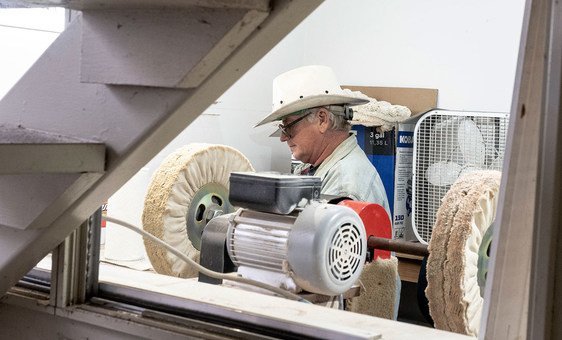 The best part of this job is meeting people from all over the world and especially French-speaking nations like Canada and France. It’s a pleasure and an honour to make accordions. This has been the most rewarding job I have had; I’ve never had so much fun in my whole life.

I’d like to expand the business as there is more demand for accordions, but we need more people who are as good as me or better. We have one man who learned how to make accordions by looking over my shoulder and he is excellent, better than me, but he is not ready to retire yet. I told him when he does retire, he has a job here.”