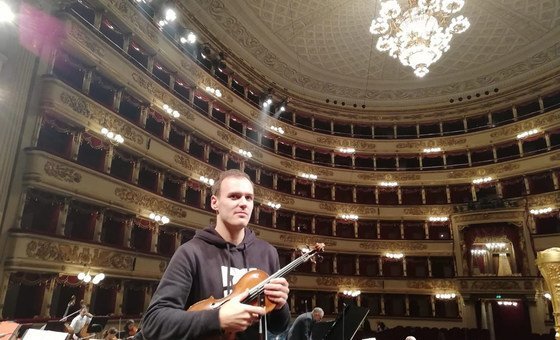 Aldo Sebastián Cicchini is a violinist from the Radiotelevisione Italiana (RAI) orchestra in Milan, Italy.  When the COVID-19 pandemic hit in Italy, he was involved in a project at La Scala, one of the most historic opera houses in Italy. But, as he explains, work ended after positive cases of the virus were confirmed there in late February.

“Everyone stopped: opera, cinema, theatre…everything. We are all worried about this, because it’s difficult to think about our work as it was before. Right now, it’s so hard to imagine going to a concert in a theatre filled with 1000 people! So, we are concerned that, once the lockdown is over, it will take several months to re-adjust, and life may never be exactly as it was before.

In March, one of my colleagues in the orchestra at La Scala called on every musician in Italy to open their window, or to go to the balcony, to perform at six in the afternoon.

Music is not a cure for the disease, but it is maybe a cure for our hearts – Aldo Cichinni, violinist, Milan

The first time I took part it was a very cold evening. It was strange, because most of the neighbours didn’t know that I played violin! When I started playing, I felt quite shy, but after a couple of minutes, I could see people happy, and smiling. Then, after I had finished the piece, they were clapping, shouting, and demanding more! I carried on playing, and they wanted more and more, so I told them, if you want this, let’s do it again tomorrow, at the same time. That was the beginning of everything.

From then on, I played many famous pieces from different countries, such as music from the movie “Cinema Paradiso”, “Claire de Lune” by Debussy, Carlos Gardel’s “Por Una Cabeza”, and “Imagine” by John Lennon. Although the acoustics are not great on the balcony, the music is bringing people closer together during this time of isolation. It is not a cure for the disease, but it is maybe a cure for our hearts.

I think that, in times like this, all the arts are very, very important. Right now, we need to survive, but surviving is not living. The beauty of art makes us united, and part of something that is bigger than us.

Here in my building, every time I played, despite the distance between us, we felt closer. It’s feels like we are a team, going forward together. And that’s the power of music. And, when I play, I am company to people who live alone, particularly older people.

We still don’t know when the city, and the country, will reopen, but I hope that every day things will get better, and that the people don’t give up. Until then, I will continue to play for them.”