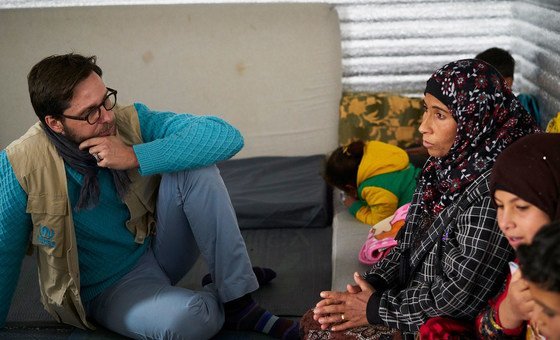 UNHCR’s Jean-Nicolas Beuze meets a Syrian woman at a refugee camp in Zarqa Governorate, Jordan in 2017., by © UNHCR/David Azia

Famine, conflict and widespread poverty mean that Yemen is one of the toughest countries in the world in which to live, both for internally displaced people and refugees who have arrived from countries like Somalia.

Ahead of a major international conference to raise funds for humanitarian aid initiatives in Yemen, UNHCR’s Jean-Nicolas Beuze has been speaking to the head of communications for the UN, Melissa Fleming, as part of the podcast series Awake at Night.

“The situation in Yemen is really dire. I’ve worked in some pretty tough places including Syria, Sudan, Libya and Afghanistan, but this is one of the worst and most desperate places I’ve experienced.

Probably two-thirds of the population relies on our humanitarian assistance for their daily survival. Half of the health facilities have been destroyed by five years of conflict. One person in eight has been displaced by conflict. There is cholera, malaria, chikungunya, and dengue fever and, on top of all this, we now have coronavirus, which is not even the main concern in terms of communicable diseases.

So, it’s a combination of all those factors that means people are barely keeping their heads above the water. I see that on a daily basis, when I go and meet families who have been displaced by the conflict.

I recently visited a shelter in Hudaydah. I was playing with the kids, asking questions to the parents and in the corner, there was a woman who had a beautiful dress with an African print. But I noticed she had a disfigured face.

She had been entirely burned by an explosion, from a bomb which had dropped next to her. She was going to the market to buy food for her kids and she told me how her entire body had caught fire. This is the kind of image which stays with you.

There was something extremely elegant and dignified about the way she interacted with me. She didn’t beg for anything. She was not appealing for help. She probably knew that there was very little we could really do, except perhaps help with some cash assistance to provide a little more comfort.

She would need treatment in another country, because the medical facilities here do not have the services she required.  She was resigned to her suffering, and like any mother in the world and a widow, she was concerned more about the survival of her kids.

UN OCHA/Giles Clarke
Yemen has been devasted by five years of conflict.

Somali refugees in Yemen have been here for decades. The situation now of refugees specifically in Yemen is one of discrimination, of scapegoating. It was quite worrisome at the beginning of the pandemic to see this, despite the fact that refugee communities have been relatively well integrated.

The Yemeni people needed to find an explanation or a scapegoat for COVID-19. So, they pointed fingers at the refugees coming from Africa. There was an element of racism.

There were allegations that they were not as healthy and focused on hygiene as the Yemeni population. And there was prejudice related to the migratory status of these people, as we saw the same reaction to internally displaced Yemenis who were on the move.

Most people live in one room probably with an extended family with two or three generations, with maybe cousins, because people can simply not afford rent. So, everybody gathers in the same room to cook and sleep. So, it is very interesting to engage with them on what it means to take preventative measures against COVID-19.

You cannot be two metres apart from a family member, who may show symptoms, because there’s only one room. You cannot wash your hands regularly because there is no tap water, and children have to be sent five kilometres to find water. You don’t wash your hands because if it’s a choice between buying rice and soap, you choose rice.

You don’t stop going out to beg on the street or to work a job for meagre wages because the money you get in the morning is the money which allows you to buy lunch.

It was fascinating how even the UN was obsessed about saying you need to empower people to take the preventative measure and I responded, ‘come on, let’s wait a minute. This is not realistic for any of the people I meet’.

Yes, the Western world worries about coronavirus, but Yemen cannot even afford to worry about the coronavirus because we have other communicable diseases which can kill you. All that. Plus, there is a famine.

I met a little girl, Fatima, who was 14 months old, and she weighed five kilos, half of what she should have weighed; she was suffering from severe malnutrition. And it was really sad because her father explained she was not able to hold in her food, that she had diarrhea. It was very difficult for him to understand that his child was malnourished or maybe he had just blocked the fact from his mind.

Somebody once asked me, ‘What are the hopes and dreams of Yemeni people’? I was really taken aback because I cannot really respond to this question. The conversations with Yemeni displaced families, and even my colleagues, reveal that although they may have dreams of moving away or studying, most of them are just concerned about their daily survival.

Listen to the audio interview here