To meet the goals of the Paris Agreement and prevent the worst impacts of the climate crisis, the world must abandon fossil fuels as quickly as possible, Selwin Hart, Special Adviser to the Secretary-General on Climate Action told UN News today.

“There is no argument around the science at all. But of course, developing countries, especially the poorest, will need assistance to make the transition to a renewable energy future,” he explained.

Mr. Hart, who is from the small island nation of Barbados and has acted as a negotiator in the past during several UN Climate Conferences (COPs), underscored that the focus should be on helping remove the barriers that developing countries face to accelerate their transition to renewables.

“For example, the cost of capital. Renewable energy investments by their nature are very capital intensive. Eighty per cent of the investment must be upfront, because you have to buy the solar panels and the battery storage and the installation, and that’s costly”, he highlighted, adding, however, that the running costs are zero because there is no need to buy any oil or diesel to power a renewable energy station. 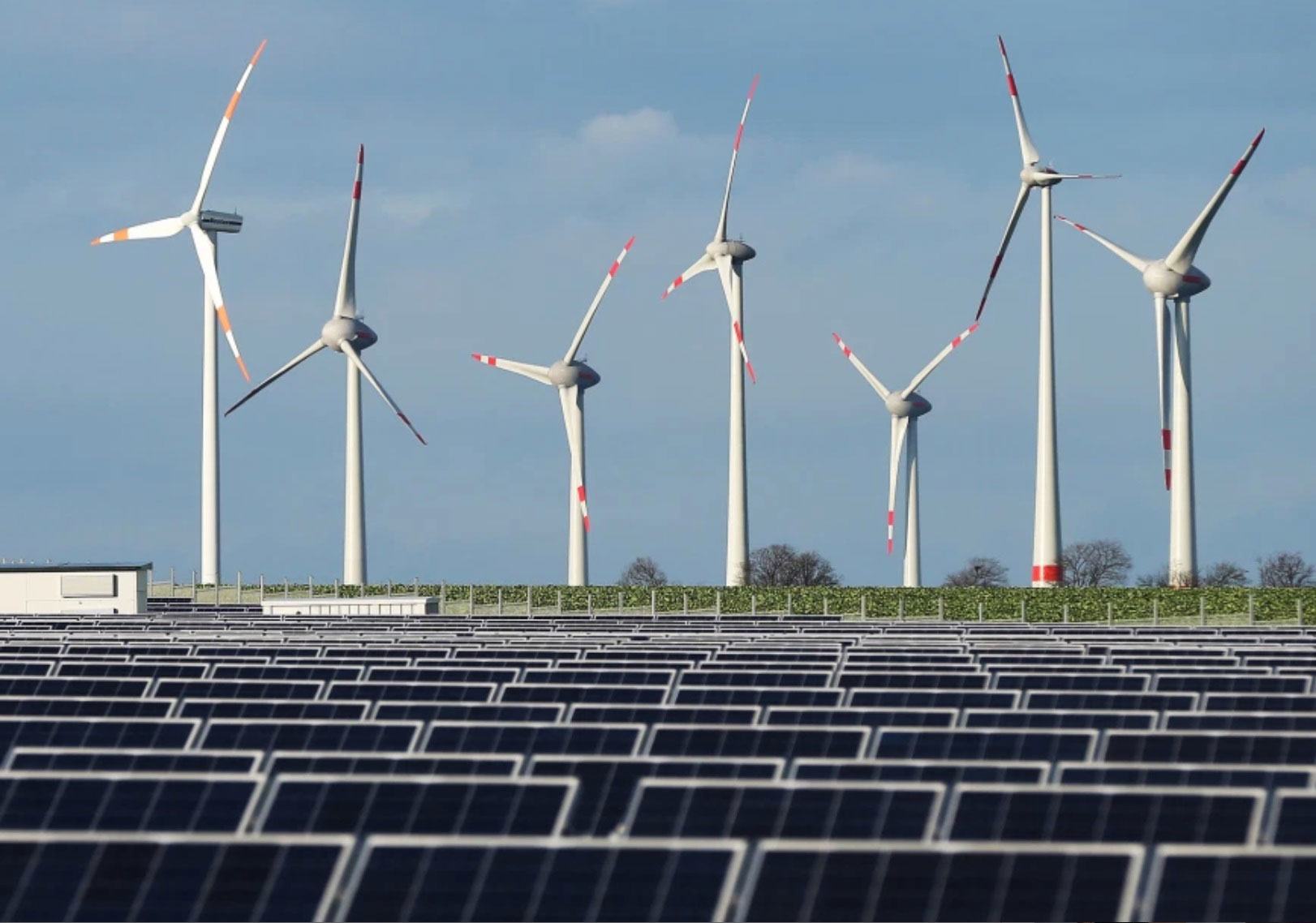 The expert gave us a striking example of the unfair conditions countries in the developing world face when it comes to the energy transition.

The international community needs to “throw the kitchen sink” at solving this problem, he stated.

For Mr. Hart, mobilizing the trillions of dollars needed to make the transition should be the focus, instead of pouring capital into new fossil fuel projects, which he sees as a real risk that could lead to investing in stranded assets or passing debts onto future generations.

And for the expert, this is more than possible, because the world has tripled its renewable energy capacity over the last decade.

“We just need to do it again this decade. The technologies are there, the finance is there. It just needs to be deployed in the right place, where the emissions are and where the population growth and energy demand is”, he urged.

© Unsplash/Ella Ivanescu
Fossil fuel power plants are one of the largest emitters of the greenhouse gases that cause climate change.

Decarbonization is shorthand for finding alternative ways of living and working that reduce emissions and capture and store carbon in our soil and vegetation. It requires a radical change in our current economic model which is focused on growth at all costs.

As ‘Decarbonization Day’ got underway at COP27 in Sharm el-Sheikh, a new report from the United Nations underscored the importance of rapid and large-scale action to tackle greenhouse gas emissions from the energy-intensive countries, which account for about 25 per cent of the total CO2 emissions globally and 66 per cent in the industrial sector.

The study singles out the cement, iron and steel, and chemicals and petrochemical industries as the most significant emitters and identifies key practical measures for them to transition to a carbon-neutral economy.

“Adopting circular economy approaches to help reduce needs for new materials will be crucial in this respect. Solutions must be implemented without delay” the Executive Secretary of the UN European Economic Comission, Olga Algayerova, said in a statement.

The key recommendation is indeed “a circular carbon economy”, based on carbon reduction, capture reuse and removal, as well as a push for innovation and research to tackle the challenge presented by the need for high temperatures and chemical processes required that are currently most efficiently reached by burning fossil fuels.

Another key recommendation is the creation of industrial clusters to “share emissions” and reduce costs, creating green and sustainable jobs. You can learn more about this here.

© Unsplash/Michael Fousert
An electric vehicle at charges in a garage.

Meanwhile, a so-called master plan to accelerate the decarbonization of five major sectors – power, road transport, steel, hydrogen, and agriculture – was also presented this Friday by the COP27 Presidency.

Governments representing over half of the global GDP, including the United States and the United Kingdom, set out a 12-month action plan with 25 collaborative actions to be delivered by COP28 to help make clean technologies cheaper and more accessible everywhere.

The plan has emerged as part of the so-named Breakthrough Agenda, an initiative launched last year during COP26 in Glasgow, Scotland.

Through the plan, actions target sectors accounting for more than 50 per cent of global greenhouse gas emissions and are also designed to reduce energy costs and enhance food security, with the building and cement sectors to be added to next year.

The outlined Priority Actions include agreements to develop common definitions for low-emission and near-zero emission steel, hydrogen and sustainable batteries, as well as ramping up clean infrastructure projects, setting a common target to phase out polluting vehicles and stimulate global demand for green industrial goods.

You can learn about this initiative here.

UNIC Tokyo/Momoko Sato
Sophia Kianni, a member of the Secretary-General’s Advisory Group on Climate Change, at the Fashion Industry on the Race to Zero event today.

The Fashion industry can contribute, too

Another sector on the spotlight for its potential for decarbonization was the fashion industry, which is responsible for 18 to 20 per cent of global greenhouse gas emissions.

In 2018, industry leaders created the Fashion Industry Charter for Climate Action, with a vision to achieve net-zero emissions by 2050.

Focusing on the ambitions of the charter, a side event at COP27 examined the importance of decarbonization across the entire fashion supply chain, from production of raw materials, manufacturing to distribution.

“The message is clear: to brands, stop lying, stop greenwashing; and to consumers, stop buying fast and furiously,” implored Sophia Kianni, a member of the Secretary-General’s Advisory Group on Climate Change, addressing the ‘Race to Zero’ event. 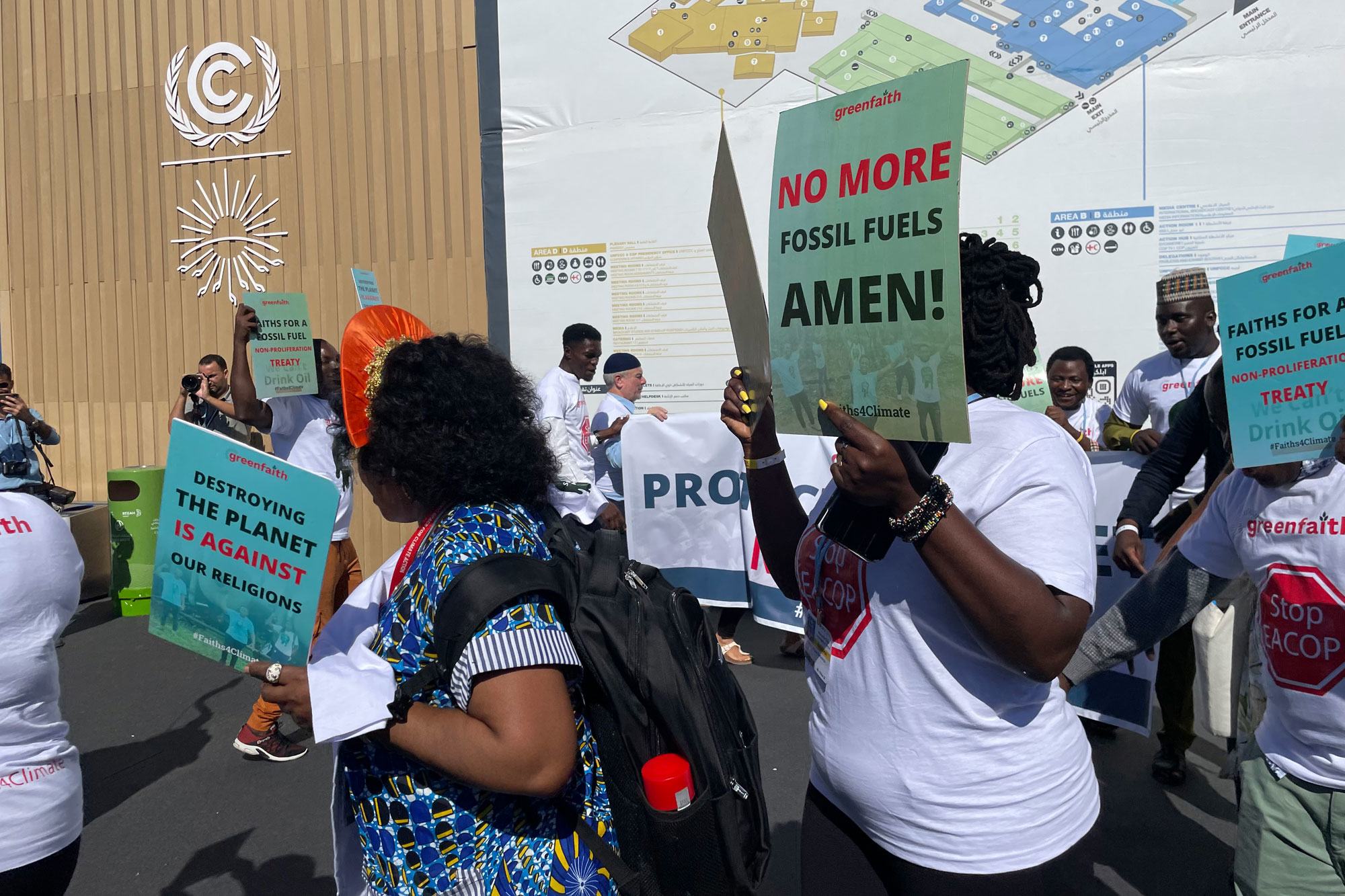 Civil society mobilises to keep fossil fuels in the ground

The country and civil society pavilions at COP27 saw another busy day on Friday with a long list of side events focused on the theme of decarbonization.

Many interactive projects, including a room-sized game that simulates the energy transition to net-zero, were presented, trying to give participants ideas about what the future could look like if the right decisions are taken.

Protesters were also out in force again today, including a group of medical doctors who were giving CPR to a globe of Earth, as a way to symbolize the health consequences of climate change, as well as a group of African faith-based representatives who danced in circles shouting, “No more fossil fuels!” and demanding action “now’.

“By COP28, maybe Africa will bring corpses to Dubai. Maybe we won’t be participating because climate change would have wiped out the continent. We are not appealing, we are demanding that the climate debt be paid for Africa, which contributed little or nothing to the changing climate” said a Ugandan activist from the NGO Greenfaith.

“Our message is simple: “Keep fossil fuels in the ground.’”

Other members of civil society are also promoting ground-up solutions to help decarbonize our societies.

“Carbon literacy is knowing the carbon footprint of our daily decisions from our diet to the way we commute. A vegetarian meal is on average 600g of carbon emissions, a serving of chicken is 1300g, serving of beef is 7,700 g. Carbon literacy is also the knowledge that the CO2 concentration in our atmosphere is currently 420ppm. If we surpass 450ppm we will surpass the 1.5C goal”, she explained to UN News.

For Ms. Li, carbon literacy is a tool that can scale quickly and remove gigatons of CO2 from our atmosphere.

“It is not rocket science and can be deployed today. As we look to decarbonization and retrofit buildings and transition our energy, carbon literacy for leaders, policymakers, and citizens can help us accelerate decarbonization and create more scalable climate solutions,” she underscored.

UNFCCC/Kiara Worth
A banner explaining the negotiations of the Global Stocktake is displayed at COP27 in Sharm El-Sheikh in Egypt.

Halfway point of the negotiations

Ambassador Wael Aboulgmagd, Special Representative for the COP27 Egyptian Presidency, held a press conference to announce that there is “good progress” in many areas of the negotiations.

“Negotiations on quite a few items are complex. For items such as the mitigation work program, the global goal on adaptation, or funding arrangements to address loss of damage, we at least see parties are working very hard and there is some progress being made,” he said

Mr. Aboulgmagd said negotiators have agreed to now extend negotiations beyond 6 pm every day, to give additional time for parties to achieve “meaningful outcomes”.

While negotiations address specific agenda items agreed before the conference and are based mostly on technical implementation this year, the ‘cover decision’, which is the final binding document that will be agreed by countries, includes other contributions.

“The first meeting on the cover decisions will be held tomorrow to listen to parties’ expectations”, the COP7 Presidency representative explained.

Ministers are also expected to arrive next week, which, according to Selwin Hart, will be the time devoted to resolving some of the big-picture political issues.

“The only way we can pull in these aspirations and hopes of the vulnerable people, including those in Africa, is for them [negotiators] to articulate a comprehensive vision that helps progress, particularly around adaptation, loss and damage and justice,” said Sindra Sharma, Global Policy Lead of Climate Action International.

Ms. Sharma added that there is no “Africa COP” without addressing these issues and that action is urgently needly.

“It starts with setting out a clear vision around how the world is actually going to step up and provide support to those communities on the frontline,” she underscored.

Eddy Perez, International Climate Diplomacy Director representing CAN Canada, explained that they know that there are obstacles ahead, but that it is imperative to reach a decision on finance in this “climate justice COP”.

“The unity of the G77 [developing countries negotiating bloc] is strong, sending one single message: ‘We need to leave this COP27 with the adoption of a loss and damage fund.’ The developed countries who have come here with a very cheap offer are actually looking forward to outcomes [that are merely procedural]. That would be a devastating outcome for COP27,” he warned.

We all must do more to avert ‘climate hell’, says Biden

Addressing the COP27 plenary, President Joe Biden said of the United States: “We’re racing forward to do our part to avert the climate hell that the UN Secretary-General so passionately warned about earlier this week.”

Mr. Biden said that he had come into office determined to “to reestablish the United States as a trustworthy and committee global leader on climate. As I stand here before you, we’ve taken enormous strides to achieve that.”

Having missed the opening of this year’s climate summit due to mid-term elections in the US, Mr. Biden said his country is back as a global leader on climate, especially in the wake of the passage of the Inflation Reduction Act, which included some $370 billion in clean energy incentives and other actions to cut greenhouse emissions.

While the President Biden pledged to meet the stated climate goals of the US by 2030, many of the civil society participants and activists in attendance voiced their disappointment and disapproval that he had not mentioned the issue of loss and damage funds available to vulnerable countries already being impacted by climate change.