Almost two dozen villagers, including 15 children, were found dead in the anglophone village of Ngarbuh after an incident on Friday, linked to separatist clashes that began in late 2017 on alleged discrimination against the francophone country’s English-speaking regions.

While the opposition party are blaming the killings on the army, no one has claimed responsibility.

In a statement issued on Monday, a UN spokesperson said Secretary-General António Guterres was “deeply concerned” over reports about the killing of civilians, including children, in the attack on 14 February.

The UN chief called on the Government to “conduct an investigation and to ensure that those responsible are held accountable”.

#Cameroon village massacre: 15 children are among the 23 victims – the latest deadly incident in an intensifying conflict btw Govt forces & armed separatists. We urge authorities to ensure a thorough investigation & to hold those responsible to account https://t.co/yAZx2ePC5J pic.twitter.com/BSBSAfiNjm

The statement concluded with Mr. Guterres reiterating that the UN stands ready “to work with all stakeholders towards a political solution to the crisis in the northwest and southwest regions of Cameroon through meaningful dialogue”.

This is just the latest deadly incident in western Cameroon where hundreds of thousands of people have been displaced by clashes between security and defense forces and armed separatist groups.

The Office of the UN High Commissioner for Human Rights (OHCHR) called it “a shocking episode” in the ongoing crisis that has afflicted the country’s northwest and southwest regions for the past three years.

Noting the Government’s announcement on Monday that it would investigate the killings and make public the findings, OHCHR Spokesperson Rupert Colville told journalists in Geneva: “We urge the authorities to ensure that the investigation is independent, impartial and thorough, and that those responsible are held fully to account”.

He cited witnesses as saying that some 40 armed men, including members of the security and defense forces, attacked the village in the department of Donga Mantung in North-West Cameroon, “opening fire on people and burning down houses”.

“The authorities said defense forces and gendarmes came under attack from people inside the village with the exchange of shots igniting a fire that affected several dwellings”, he continued.

According to information from UN colleagues on the ground, among the 23 people killed, counting nine children under the age of five. The victims also included two pregnant women, one of whom died of her injuries in hospital.

“We call on the Government to ensure that the security forces abide by applicable international law norms standards during the conduct of their operations”, Mr. Colville said, while similarly reminding armed separatist groups of their responsibilities under international law and all parties to refrain from deliberate attacks on civilians. 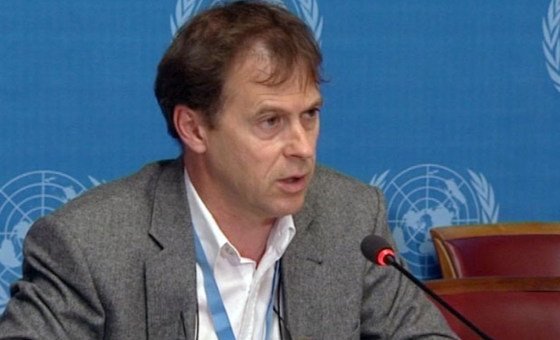 OHCHR has been following developments in the northwest and southwest regions as an already tense situation worsened ahead of 9 February’s parliamentary and municipal elections.

The Government deployed some 700 additional troops in the regions where armed separatists reportedly kidnapped dozens of candidates, most from the Social Democratic Front – one of the country’s biggest opposition parties.

Most of the candidates were subsequently released. The UN Human Rights Office also received information that voting centres and the houses of those involved in the election campaign were attacked by separatists.

Last May, at the end of a visit to Cameroon, High Commissioner for Human Rights Michelle Bachelet welcomed the Government’s openness to work with the UN and OHCHR to seek solutions to the country’s human rights and humanitarian crises.

“We urge the Government of Cameroon to take concrete steps to implement recommendations made last year by the UN Human Rights Office. We reiterate our readiness to help the Government to protect the human rights of people all across Cameroon”, concluded the OHCHR spokesperson.

At the same time, the UN Office for the Coordination of Humanitarian Affairs (OCHA) dispatched an assessment team to gauge the needs of those displaced.

While security conditions barred it from reaching the Ntumbo village, staff were able to speak to the displaced and survivors about 2km away.

OCHA shined a light on the northwest and southwest regions where “civilians are bearing the brunt of the violence and living in constant fear”.

There have been frequent reports of abuses by all parties including killings, torture, destruction of villages, and violent incursions against schools and hospitals. Aid workers have also come under attack.

The crisis has left some 2.3 million people urgently in need of food, shelter and protection – an increase of one million compared a year ago. While some 1.7 million of those remain within the two regions, 600,000 have fled to the Littoral, west and center regions.

And aid organizations continue to address humanitarian needs but access is constrained mainly by insecurity.

For 2020, the humanitarian community have initially estimated a financial need of over $317 million, which to date has been underfunded.