This and other offensive questions are consistently put to traumatized victims around the world – placing blame on their shoulders for a crime perpetrated against them. 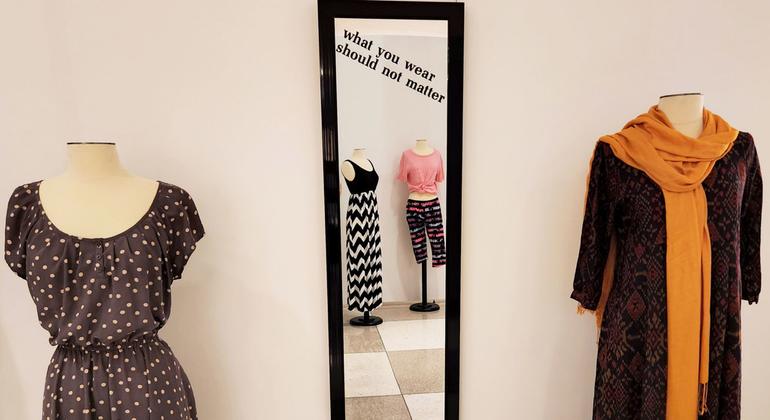 To highlight the victim-blaming that underpins these kind of questions, US civil rights organization Rise partnered with the UN Spotlight Initiative to stage an exhibition  at UN Headquarters in New York, that confirms the pervasiveness of sexual violence across all cultures and underscores that what a victim is wearing, should have no bearing in the investigation of a heinous crime.

According to the World Health Organization (WHO), 35 per cent of women globally, or more than one-third of the world’s population, have survived sexual violence.

This is equivalent to the combined populations of North America and Europe. Rape is an epidemic.

Clothing is irrelevant, it is never an invitation for violence, and does not cause attacks. Perpetrators do.

“What I was wearing should not matter,” said survivor Samantha McCoy, an attorney and activist from Texas.

She stressed that her geographical location should not determine “whether I received proper care”, reminding that consent cannot be given, if a person is “not responsive”.

Since 2018, through her tireless advocacy work Samantha has been successful in advocating for new legislation on the issue, in Indiana and Texas. And she continues to seek legal reform, on behalf of all survivors.

In the fashion world, the question “what were you wearing?” can empower, celebrate creativity and mark influence. But for survivors of sexual violence, it becomes a ritualistic blame tactic. 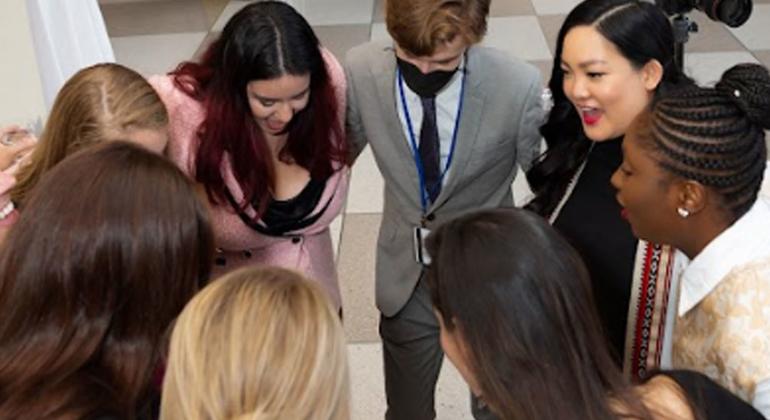 During the launch, Deputy Secretary-General Amina J. Mohammed observed that “by asking the question What Were You Wearing?, this exhibition flips the narrative on victim-shaming and blaming”.

“They mirror the diversity of people who experience violence from every region of the world, including a two-year-old child…[and] demonstrate more clearly than any legal argument could, that women and girls are attacked regardless of what they are wearing,” she said.

General Assembly President Abdulla Shahid said the exhibit “underscored the reality that the threat of rape looms over the lives of all women, regardless of their station in life…their occupation, [or] their clothing choices”.

“This exhibition should be a catalyst to spur important conversations about our collective responsibility to eliminate violence against women and girls”.

Representing each of the five UN Regional Groups, mannequins were clothed in the outfits worn by women as they were being sexually assaulted – 103 in all, symbolizing the 1.3 billion survivors of sexual violence across the globe.

“They were worn by women and girls just going about their daily lives – until they were attacked,” said the deputy UN chief. “No one should be assaulted based on their choice of clothing. No one should be abused. Full stop”.

No one should be abused. Full stop –  UN deputy chief

Survivor Amanda Nguyen, CEO and Founder of Rise, underscored that “what we were wearing at the time of our attack was not an invitation for violence…did not cause the attack…[and] is irrelevant”.

“By boldly answering the question and showing the world what we were wearing, we see an opportunity to open minds and shift attitudes about what sexual assault looks like,” she explained.

The project highlights the bravery and resilience of survivors. And displaying inside UN Headquarters the visceral and mundane reality of sexual assault, adds a powerful layer of international symbolism.

Survivor Kadijatu Grace described herself as a “lucky one” who gets to speak for those who cannot, “like young Khadija, my namesake, that was raped and killed two years ago”.

She recalled that when civil war broke out in Sierra Leone, rebels abducted and raped girls. Then 13-years-old, the young teenager’s mother bought her a boat ticket and in desperation, entrusted Kadijatu’s escape to a stranger.

“He took me to where the engines were, so nobody would hear, strangled me, put my hands behind my back, stuffed my mouth with his shirt, warned he would throw me over if I spoke out and threatened to go back and kill my mother,” she recounted.

It took time, but Kadijatu was finally able to acknowledge that she was raped through no fault of her own.

“You thought you broke me, but you gave me a platform,” she said triumphantly. Now, “I will never stop telling my story”.

Spotlight Iniative
Sexual assault survivor Kadijatu Grace recounts her harrowing story at a reception for the “What were you wearing?” exhibit at UN Headquarters in New York.

Back in 2019, Britney Lane was sexually assaulted by a coworker during a night out with friends.

“I repeated my story numerous times that day, starting with local police and ending with staff from two different hospitals. The first question I was asked by almost every police officer and doctor was: what were you wearing?”

At the time of the attack, the officer who took her statement advised Britney against pressing charges, saying that there did not seem to be enough evidence.

“Like many other survivors, I was filled with embarrassment, shame and guilt,” she said. “I can’t change what happened to me that night, but I can work to change the system to ensure no one is failed again”.

Amanda still remembers spending six hours in the hospital the night after she was raped.

The first time she told her story to public officials, the woman who later founded Rise, went home and cried.

“They didn’t care. But the next morning, I got back up and I did it again”.

En route to speak to Congress, Amanda’s stoic Uber driver asked where she was going. After being told, he began to cry, opening up that his daughter was also raped.

“Can I shake your hand?” he asked upon their arrival. “Thank you so much for fighting for my daughter”.

Although protesters march worldwide demanding justice for survivors, and hashtags, such as #MeTo, have become massive on social media, the UN General Assembly has yet to pass a resolution focused solely on protection of sexual violence survivors.

It did however, unanimously adopt a new agenda item that enshrines access to justice for sexual assault survivors and permanently places it on the Assembly’s docket to be the discussed annually by UN Member States.

At the same time, a resolution has been drafted, which would provide universal jurisdiction to prosecute offences, the ability to terminate legal ties with the assailant, and the ability to report the crime without financial cost to the survivor.

Paris Hilton, granddaughter of the US hotel magnet, was at age 16, woken up by two men with handcuffs and transported across state lines to a residential treatment facility.

“For two years, I endured physical, psychological and sexual abuse by staff. I felt so powerless. I’m here today because this abuse is still happening,” she said in support of the proposed draft.