The World Health Organization’s (WHO) Global status report on the public health response to dementia, reveals that the European Region hosts half of all countries offering effective support.

Yet even in Europe, many plans are expiring, or have already expired, indicating a need for renewed government commitments.

“Dementia robs millions of people of their memories, independence and dignity, but it also robs the rest of us of the people we know and love”, said WHO chief Tedros Adhanom Ghebreyesus.

Dementia is caused by a variety of diseases and injuries that affect the brain, such as Alzheimer’s disease or stroke. It affects memory and other cognitive functions, as well as the ability to perform everyday tasks.

“The world is failing people with dementia, and that hurts all of us”, said Tedros. “Four years ago, governments agreed a clear set of targets to improve dementia care. But targets alone are not enough”.

The disability associated with dementia is a key driver of costs related to the condition. In 2019, the global price tag was estimated at $1.3 trillion – a number that is projected to rise to $1.7 trillion by 2030, or $2.8 trillion if care costs are included.

At the same time, the report explains that the number of people living with dementia is growing.

“We need concerted action to ensure that all people with dementia are able to live with the support and dignity they deserve”, stressed the WHO chief.

Support in terms of caring for people with dementia and those who provide that care must be strengthened at national levels in both formal and informal settings, lays out the report.

This includes community-based services as well as specialists, long-term and palliative care. 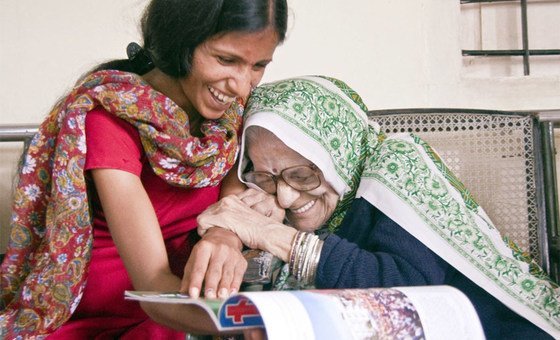 The type and level of services provided by the health and social care sectors also determine the level of informal support that is primarily provided by family members, the report notes.

While social care costs make up over a third, informal care accounts for about half the global cost of dementia.

In low and middle-income countries, 65 per cent of the costs are attributable to informal care while that number drops to approximately 40 per cent in richer countries.

A series of unsuccessful clinical trials for treatments combined with high research and development costs have led to a reluctance to carry out further studies.

However, the GDO shows that funding has increased recently in the United Kingdom, United States, Canada and other high-income countries, including an annual investment in US Alzheimer’s disease research from $631 million in 2015, to an estimated $2.8 billion in 2020.

“To have a better chance of success, dementia research efforts need to have a clear direction and be better coordinated”, said Tarun Dua, Head of the Brain Health Unit at WHO.

This is why WHO is developing the Dementia Research Blueprint, a global coordination mechanism to provide structure to research efforts and stimulate new initiatives.”

While only two-thirds of countries reporting to the GDO “rarely” if ever involve people with dementia in their studies, WHO upheld that patients – along with their care givers and families – should be included in future research efforts.

Meanwhile, countries in all regions have made progress in implementing public awareness campaigns to improve the understanding of dementia, said the report.

Two-thirds of those reporting to the GDO have run awareness-raising campaigns.

And two-thirds have moved to improve social and physical accessibility for people with dementia and provided training and education to populations outside the care sector, such as to police, fire services and first responders.

World Bank/Miso Lisanin
An elderly woman rides her bike in Croatia (13 February 2013). New World Health Organization (WHO) guidelines stress the value of regular exercise to prevent the onset of dementia.