“And by working as one, it’s a race we can win. Let’s all become the champions the ocean needs. Let’s end the ocean emergency and preserve this precious blue gift for our children and grandchildren,” urged the UN chief.

The Secretary-General was speaking from the Ocean Science Centre Mindelo, in São Vicente, a state-of-the-art facility that hosts large marine scientific equipment such as deep-sea robots, as well as electronics workshops, and cutting-edge laboratories.

On Monday morning, as the building opened its doors to the participants of the Summit, it served as a visible manifestation of the bet Cabo Verde is making on boosting the archipelago’s blue economy.

Looking through the huge doors opening onto the Port, the same harbor that allowed many Cabo Verdeans to leave in search of a better life, the Prime Minister noted how the ocean used to describe a feeling of longing and melancholy. 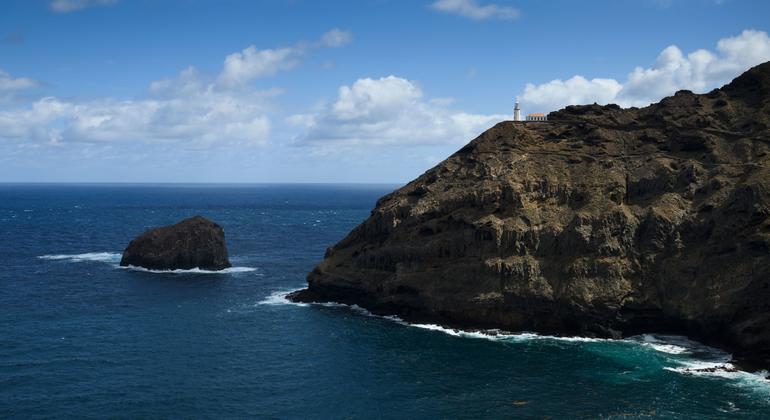 ‘The ocean is a matter of survival’

Speaking to UN News, the UN Special Adviser on Africa, Cristina Duarte, noted that as Cabo Verde is a 10-island chain that sits off West Africa’s Atlantic coast, some 99.3 per cent of the nation’s territory is water.

Ms. Duarte, who is Cabo Verdean, was the country’s Minister of Finance, Planning and Public Administration from 2006 to 2016. “We might be more creatures from the ocean than from the land,” she said. “For Cabo Verde, the oceans are a matter of survival.”

“So, its conservation [must be done] in a context of management of a natural resource, because we have to take from it what Cabo Verde needs to develop. Preserve it, but not forget that, for Cabo Verde, it is an economic resource,” Mrs. Duarte explained. 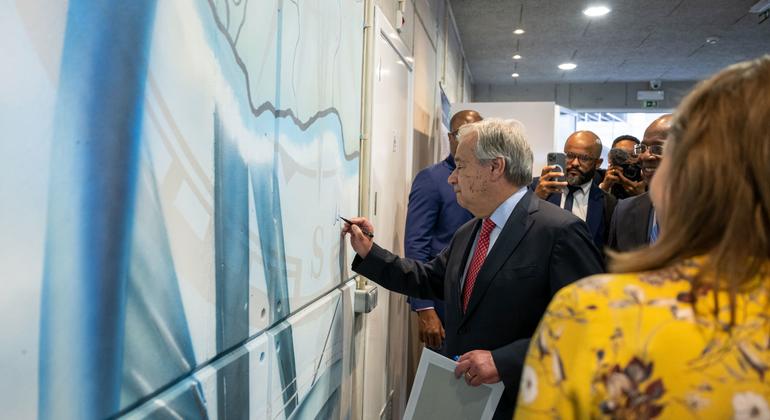 Racing for the ocean

The Ocean Race first set sail in 1973, taking sailors around the world every three or four years.

For the last four decades, as ocean health activist Danni Washington noted today at the Summit, sailors would see these islands on the distance, or race through the middle of them. Sometimes they were even rescued by Cabo Verdeans, but the race had never made a stop in the archipelago.

On Friday night, the country became the first ever West African nation in the competition’s history to host a stopover.

Addressing the Summit, the competition’s Chairman, Richard Brisius, assured the UN Secretary-General of the participants’ commitment to the cause of the oceans.

“You have all of us at Ocean Race in your crew,” he said. “We are ocean people; we care for the ocean, and we are passionately doing our best.”

For his part, the Mr. Guterres hailed “the inspiring courage of women and men sailing this grueling six-month race around the world.”

Moreover, he said, it’s “also inspiring” to know that every boat is carrying special equipment to gather scientific data to help ensure a healthy ocean for the future.

A key resource at risk

For the UN Secretary-General, the Summit was also an opportunity to sound the alarm: “The ocean is life. The ocean is livelihoods. And the ocean is in trouble.”

The UN chief explained that some 35 per cent of global fish stocks are over-exploited, global heating is pushing ocean temperatures to new heights, fueling more frequent and intense storms, rising sea levels, and the salinization of coastal lands and aquifers.

“Meanwhile, toxic chemicals and millions of tons of plastic waste are flooding into coastal ecosystems – killing or injuring fish, sea turtles, seabirds and marine mammals, making their way into the food chain and ultimately being consumed by us,” Mr. Guterres stated.

According to UN estimates, by 2050, there could be more plastic in the sea than fish. 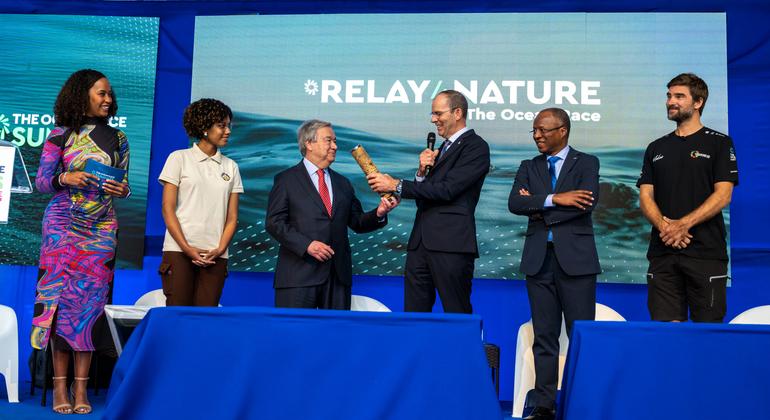 From ‘super year’ to ‘super action’

Against this backdrop, the Secretary-General does believe the world took some important steps to correct course last year.

These advances included a “historic agreement” in Nairobi to negotiate a globally binding treaty to control plastic pollution, the UN Ocean Conference in Lisbon, where countries made hundreds of new voluntary commitments and pledges, and the UN Biodiversity Conference in Montreal, that ended with countries agreeing on a target to protect 30 per cent of land, water, coastal and marine ecosystems by 2030.

“Some have called 2022 the ocean’s ‘super year.’ But the race is far from over. We need to make 2023 a year of “super action,” so we can end the ocean emergency once and for all,” noted Mr. Guterres.

For the UN chief, the world needs urgent action in four fundamental ways: sustainable maritime industries; delivering massive support for developing countries; winning the race against a changing climate; and, lastly, deploying science, technology and innovation on an unprecedented scale.

“Bias is baked into the system. It routinely denies developing countries – particularly vulnerable middle-income countries and Small Island Developing States like Cabo Verde – the concessional financing and debt relief they need,” he argued.

To fight climate change, Mr. Guterres called on ocean-based industries to follow the lead of the Ocean Race and limit their carbon footprints. As an example, he said that the shipping sector must commit to net zero emissions by 2050, and present credible plans to implement it.

Closing the event, the UN chief participated in a Relay4Nature ceremony, receiving a baton, which started travelling around the world in May of 2021, passing hand to hand, from one ocean advocate to another, as a symbolic call on world leaders to radically increase their ambitions to protect the seas.

The initiative started with the UN Special Envoy for the Ocean, Peter Thomson, was then passed the ‘Nature Baton’ to politicians like French President Emmanuel Macron, celebrities like Jason Momoa, and arrived in Cabo Verde by boat, all the way from Alicante, in Spain, in the hands of Boris Herrmann, the skipper of Team Malizia.

As he held the iconic baton, the Secretary-General said that he represented “a generation thar has largely failed the oceans.”

Before handing it to Odara dos Santos Brito, a student from Liceu Jorge Barbosa, in São Vicente, Mr. Guterres said he was “very, very grateful” that he could give it to a generation that he trusts to “reverse the wrongs that we did, rescue the oceans, defeat climate change, rescue the planet and rescue us all.”

Accepting the baton, the young Cabo Verdean didn’t flinch. “We accept that commitment,” she said.