Over the last week intense rainfall has pummelled the African island country in the Indian Ocean, sparking multiple crises across the country’s central Analamanga Region.

🇲🇬 Over 62,000 people have been affected by flooding in #Madagascar, with close to 37,000 displaced. @UNOCHA_ROSEA Flash Update No.1

“The Government, municipal authorities in Antananarivo and humanitarians are mobilizing assistance to people impacted by flooding in the capital”, OCHA tweeted, saying that “providing access to water, food and other vital items in displacement sites is the top priority”.

The rains were initially driven by an Intertropical Convergence Zone, around the equator, around 17 January and increased when a Tropical Depression, or cyclone, made landfall in the east of the country some three days later, exiting the other side of the island the following day.

Twenty-four lives were lost over the weekend, mostly in the capital where traditional houses collapsed, and others were swept away by landslides.

According to authorities, over 62,000 people have been affected in seven regions, including more than 58,000 in the Analamanga Region and its surrounding metropolitan area.

Meanwhile over 6,800 houses are under water and many others are at risk of flooding or collapsing.

Over 35,260 people have been forced to take shelter in 62 displacement sites established by the authorities, according to the National Office for Risk and Disaster Management.

OCHA said that nearly 27,000 people were displaced or evacuated last weekend alone, and that the Government continues to carry out preventive evacuations in Antananarivo, which is on red alert for further flooding.

As river waters are increasing to emergency levels, the red alert has prompted the Ministry of Education to extend the suspension of classes, which was previously announced on 20 January, for 48 hours in Analamanga Region, until at least Friday.

The rains have also damaged roads and other infrastructure in that Region, including the water intake structure of the treatment station in Ambohidratrimosome District.

Some parts of the national road connecting the capital to Ambatondrazaka in the country’s east were also destroyed, impacting transport in and out of Antananarivo.

Meanwhile, one million people in the south are facing severe hunger.

The World Food Programme (WFP) recently warned that the situation in southern Madagascar could become the first-ever famine caused by climate change.

“The world cannot look away. People in Madagascar need our support now, and into the future,” said Issa Sanogo, the UN Humanitarian Coordinator in the country, noting the critical need to scale up a humanitarian response as the country is in its lean season, which runs until April.

Across Madagascar, heavy rainfall is expected to continue and could affect many regions in the days ahead, including Alaotra, Betsiboka, Mangoro, and Sofia, according to Meteo Madagascar and other weather services.

The Tropical Depression that left the country on 23 January has evolved into the Moderate Tropical Storm Ana and is still causing rains in Madagascar.

“Tropical Storm Ana made landfall yesterday in Nampula Province, northern Mozambique, bringing heavy rains and strong winds”, OCHA tweeted, warning that it could “affect thousands of people in the northern and central regions of the country in the coming hours and days”.

Meanwhile, Meteo Madagascar and the Red Cross Piroi Centre are monitoring other tropical weather systems currently in the southwest of the Indian Ocean, which could lead to the formation of tropical storms or even cyclones in the coming days. 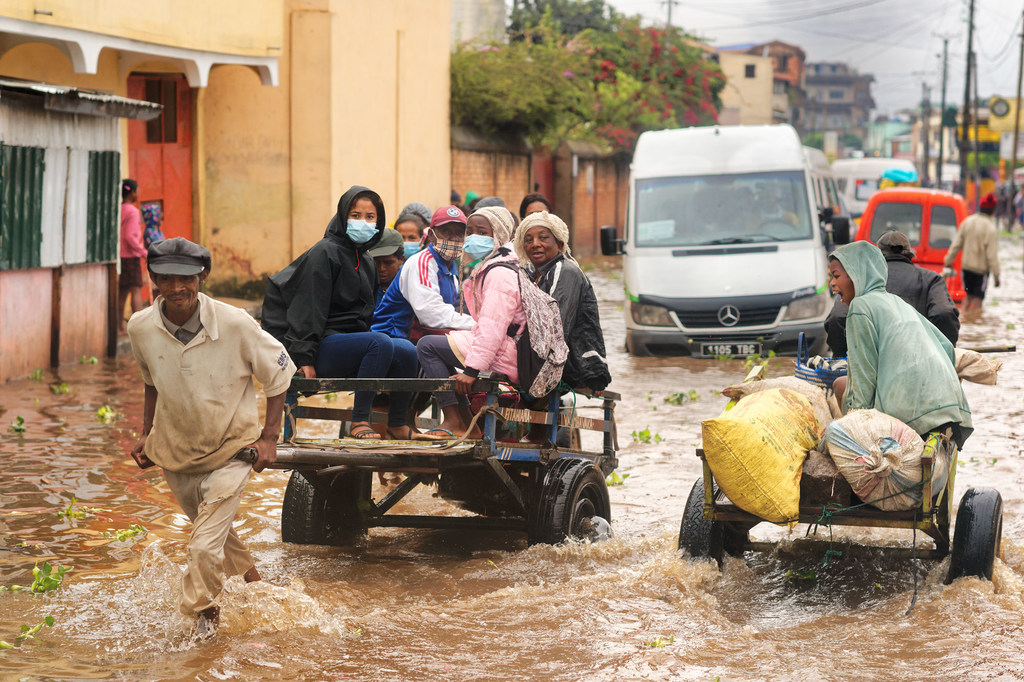 © UNICEF/Rindra Ramasomanana
A man transports people on a cart on the flooded main road in Ilanivato district, Antananarivo. Madagascar.