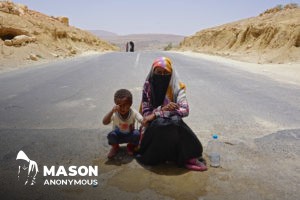 Hunger in Yemen: WFP considers aid suspension in face of repeated interference by some Houthi leaders 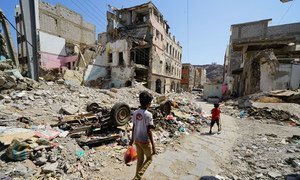 The UN emergency food relief agency said on Monday that without full access and “freedom to decide” who receives lifesaving aid, in Houthi rebel-controlled areas of Yemen, it could be forced to implement a “phased suspension”.

In a statement, Senior Spokesperson for the World Food Programme (WFP), Herve Verhoosel said that after more than four years of brutal conflict between Houthis and a Government-led coalition “our greatest challenge does not come from the guns” but instead “the obstructive and uncooperative role of some of the Houthi leaders in areas under their control.” 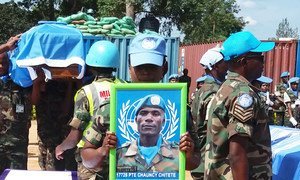 In recognition of his “brave and selfless” action under fire in the Democratic Republic of Congo (DRC)  ̶  saving the life of a fellow ‘blue helmet’ and ­­helping his colleagues repel an armed group  ̶  the late Malawian soldier Chancy Chitete, will be honoured with the UN’s highest peacekeeping award this coming Friday, by the UN Secretary-General.

Private Chitete was killed in November 2018, during an operation in the eastern part of the country to combat the ADF, an armed force that had been terrorizing civilians and disrupting the UN’s ongoing efforts to treat, and halt, the spread of the deadly Ebola virus.

Read the story in full, here. 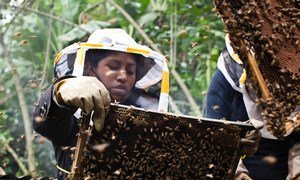 If you think you’re busy, then spare a thought for the world’s bees; for they, along with other insects and animals, are responsible for pollinating more than 75 per cent of the planet’s favourite food crops.

The problem is, pollinators are under threat, and their numbers are falling because of human impact. We are likely losing some species forever, the UN Food and Agricultural Organization (FAO) believes, based on available data in the United States and Europe.

It’s a warning FAO highlighted on World Bee Day, which observed on Monday. Want to bee up to speed? Full story here. 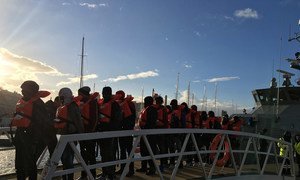 An Italian government proposal to fine those who rescue migrants or refugees at sea should be rejected by lawmakers, UN independent human rights experts have said.

In a written statement condemning the draft decree, the six rights experts urge the authorities “to stop endangering the lives of migrants, including asylum seekers and victims of trafficking in persons”, in the name of national security.

The right to life and the principle of not sending vulnerable people back to places where they risk ill-treatment or worse “should always prevail over national legislation”, they said.

So far in 2019, 1,200 migrants and refugees have reached Italian shores, most after setting sail from the North African coastline.

Under the Italian proposal, vessels would be fined for every person rescued at sea and taken to Italian territory. 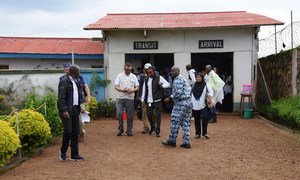 The risk of Ebola spreading in the Democratic Republic of the Congo remains “very high”, the head of the World Health Organization (WHO), said on Monday.

Tedros Adhanom Ghebreyesus’s warning follows a recent spike in the number of infections due to the virus in the unstable north-east of the country.

Since January, there have been dozens of attacks on health facilities in North Kivu, and on 19 April, 42-year-old Dr. Richard Valery from Cameroon was killed in Butembo.

Here’s Mr. Tedros telling the World Health Assembly in Geneva what Dr. Valery’s colleagues told him, when he visited them in DRC:

“They told me, and I quote, ‘We’re here to save lives. We will not be intimidated by violence. We will finish the job.’…Unless we unite to end this outbreak, we run the very real risk that it will become more widespread, more expensive and more aggressive…Ebola does not take sides, it’s the enemy of everybody.”

To date, WHO has vaccinated some 120,00 people against Ebola, which Tedros said was more than 97 per cent effective, and four experimental treatments have been given to 800 patients.

Listen to, or download our audio News In Brief for 20 May, on SoundCloud: