Neatly arranged rows of deep marine blue-coloured photovoltaic panels are lined up on the undulating hills of one of Hawaii’s volcanic islands, creating a sea of solar-energy generation. It’s midday, and the strong tropical sun is beating down on this power plant, which will provide electricity to over 70,000 people.

This is Kauai, one of seven inhabited islands in the northwest of the Hawaiian archipelago, where energy generation is not just an aspiration but also a necessity. The Kauai Island Utility Cooperative (KIUC), a non-profit organization runs this plant, and its 77,000 solar panels generate at least 10 per cent of the islands power, 24 hours a day, 365 days of the year. 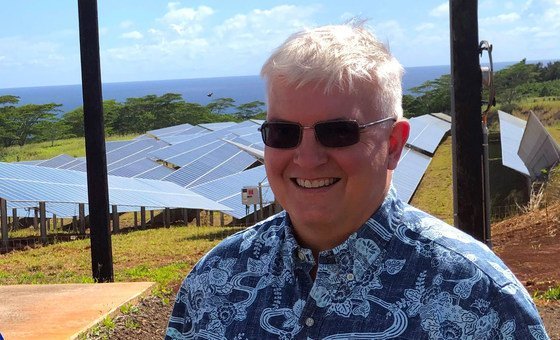 Energy costs in Hawaii, one of the world’s remotest island communities, have typically always been high, as fossil fuels have to be imported to fire the power plants.

Speaking to UN News before the oil price declined to historical lows in April 2020, David Bissell, the Chief Executive Officer of KIUC said that the cost of solar power is “significantly lower than a cost of oil-generated power” adding that “it’s getting cheaper as the technology improves.” And, importantly for businesses and domestic consumers, solar power has stabilized prices which “before could have fluctuated by 50 per cent depending on the volatility of the price of oil.”

One of the key challenges for every solar power facility is how to store electricity which is plentiful during sunny days but which, for obvious reasons, cannot be generated at night.

“Right now, during the sunniest time of the day, we are probably meeting 100 per cent of Kauai’s daytime energy needs,” said Mr. Bissell, “and now we are able to store any excess in batteries.”

KIUC unveiled the “world’s first utility-scale solar plus battery storage generation facility” in March 2017. The battery allows the cooperative to store power during the day and dispatch it over a four-hour period during the evening peak demand.

Solar power generation on Kauai is one part of an ambitious programme to move Hawaii to 100 per cent sustainable energy by 2045.  The Sustainable Hawaii initiative was launched in 2016 in support of the globally-agreed Sustainable Development Goals (SDGs) a set of 17 targets to reduce poverty, protect the  planet and ensure peace and prosperity for all, by 2030. SDG 7 which focuses on affordable and clean energy commits to increasing “substantially the share of renewable energy in the global energy mix.”

The Governor of Hawaii, David Ige, told UN News that other US state governors “were generally very surprised. They thought that our commitment to 100 per cent clean renewable energy for electricity was so beyond possible that it was a foolish undertaking.”

Although it is getting cheaper to build solar electricity generating facilities, it is still an expensive undertaking for developing countries. Nevertheless, Governor Ige says he’s “proud that Hawaii has really inspired other states and communities.”

One significant pressure facing Hawaii is a lack of space as the population of 1.4 million residents compete for land with farmers, tourism and industry. 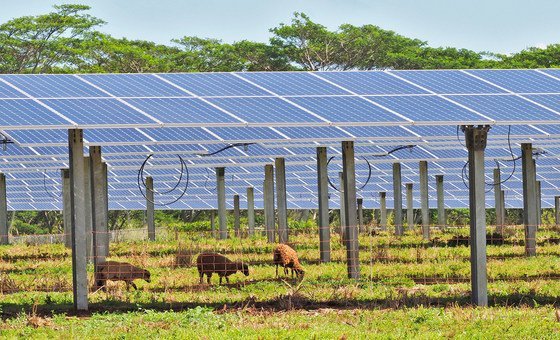 However, a unique partnership between a local sheep farmer and the Kauai Island Utility Cooperative is demonstrating how businesses competing for land resources can have a mutually beneficial relationship.

Darryl Kaneshiro’s 350 sheep are deployed to the facility to graze on the luscious, quickly growing, tropical grass, which otherwise might envelope the solar panels and impede their productivity and power output.

“I won a competitive bid against landscaping companies which wanted to clear the grass with machines,” he said. This is just more efficient and it’s good for the environment and sustainable.”

Small islands, such as Kauai, face unique environmental challenges and external supply shocks due to their remoteness and limited natural resource base, so “developing solar power as part of a green investment strategy that links different sectors of their economy creates a multiplier effect in sustainably managing natural resources, creating jobs and advancing a just transition to a low carbon economy” said the ILO’s green economy expert, Moustapha Kamal Gueye.

As the sheep settle down satiated with grass in the shade of the solar facility, the panels automatically tilt another few inches to catch the afternoon sun, generating electricity which will be stored in the batteries for evening use, bringing Hawaii one step closer to 100 per cent power sustainability.

Affordable and Clean Energy, and the UN