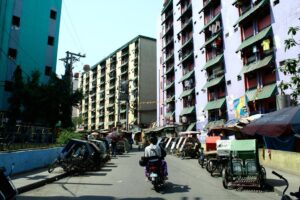 According to spokesperson Ravina Shamdasani, OHCHR received information stating that at around 3:15am on Sunday, eight men and one woman were killed in Batangas, Cavite, Laguna and Rizal as police and military executed search warrants issued by a Manila court.

“We are deeply worried that these latest killings indicate an escalation in violence, intimidation, harassment and ‘red-tagging’ of human rights defenders”, she said, noting a history of human rights advocates being “red-tagged” – or accused of fronting for the armed wing of the Communist party.

Among those killed were labour rights activist Emanuel Asuncion, along with husband and wife Chai Lemita-Evangelista and Ariel Evangelista, who worked on issues relating to the rights of fishing communities and were reportedly shot inside their home. Melvin Dasigao and Mark Lee Coros Bacasno were also among the victims; advocates for housing rights of people rendered homeless, according to OHCHR.

Two indigenous peoples’ activists and two housing rights activists were also among those killed and six people were reportedly arrested during the operations.

“The Government has informed us that the operation was based on search warrants issued in the context of its counter-insurgency campaign against the New People’s Army”, Ms. Shamdasani said, briefing journalists in Geneva.

She pointed out that previous search warrants executed at night have also resulted in killings, including on 30 December when nine Tumandok indigenous peoples’ rights activists were killed during joint operations, executing search warrants in Panay.

OHCHR welcomed the Government’s commitment to investigate these cases, which it called “a critical test” for the domestic investigative mechanisms that it had established.

While the UN is working with the Government to strengthen these mechanisms, Ms. Shamdasani stressed that they must be “prompt, transparent and effective” to meet international standards.

She detailed that the High Commissioner’s June 2020 Human Rights Council report on the Philippines documented “a serious lack of due process in police operations, and near-total impunity for the use of lethal force by the police and the military”.

In that report, the High Commissioner warned that “red-tagging” had proven extremely dangerous and urged the protection of human rights defenders, journalists and others at risk.

In recent months, there have been dozens of activists and several journalists arrested, including on Human Rights Day, 10 December.

“We urge the police to take urgent measures to prevent the use of excessive force resulting in loss of lives during law enforcement operations”, the OHCHR spokesperson said.

“We also call on the Government and members of the security forces to refrain from rhetoric that may lead to violations, and instead make public commitments to uphold human rights and the rule of law”.