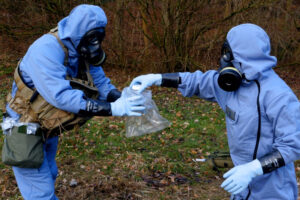 The UN-backed international Organisation for the Prohibition of Chemical Weapons (OPCW) released the findings of the second report by its Investigation and Identification Team (IIT), saying that “at least one cylinder” of deadly chlorine gas had been dropped on the night of 4 February, spreading “over a large area” and affecting at least 12 Syrians on the ground.

Questioned by reporters at UN Headquarters in New York about the report, the UN Spokesperson said that Secretary-General António Guterres had received the report, “and is deeply concerned by its findings.

“It is imperative to identify and hold accountable all those who have used chemical weapons.”

The report states that although nobody was killed, a dozen people had been treated for symptoms of chemical poisoning, after the Syrian air force helicopter “under the control of Tiger Forces” had dropped a cylinder, which “ruptured and released” the chlorine.

In its general conclusion, the IIT states that although it is aware of general information related to Syrian government investigations that “could be relevant to the use of chemical weapons”, it had not obtained or received information from the Syrian authorities “though it requested it”, which is a breach of the Chemical Weapons Convention.

Neither did the IIT uncover any information indicating that “rogue units or individuals” could have been responsible for chemical weapons use in the 2018 Saraqib attack.

The OPCW investigation team is responsible for examining all evidence that can be gathered on alleged attacks in Syria, including interviews with witnesses, once the body’s Fact-Finding Mission has determined that chemical weapons have been used or likely used.

The IIT released its first report a year ago, asserting that the Syrian military had used the nerve agent Sarin and chlorine gas, in two attacks on the village of Ltamenah, in March 2017.

As the implementing body for the Chemical Weapons Convention, the OPCW, with its 193 Member States, oversees the global endeavour to permanently eliminate chemical weapons. Since the Convention’s entry into force in 1997, it is the most successful disarmament treaty eliminating an entire class of weapons of mass destruction.