An ongoing economic crisis and political turmoil have pushed food price inflation to above 90 percent, with a shortage of fuel disrupting access, livelihoods, and food safety programmes, leaving millions vulnerable to food insecurity.

As the food voucher distribution gets underway, the women make their way up through an open staircase to the first-floor hall awaiting their turn. Many of them are young and in their first pregnancy. The floor gets crowded, but everyone is masked to guard against COVID-19 infection.

Though most of the faces are covered, the anxiety and concern are visible in their eyes.

Thirty-two-year-old Dushanthi, a mother of a three-year-old and a housewife in her third trimester of pregnancy, is one of the women who received the vouchers that can be exchanged for food items worth 15,000 Sri Lankan Rupees, just over $40. 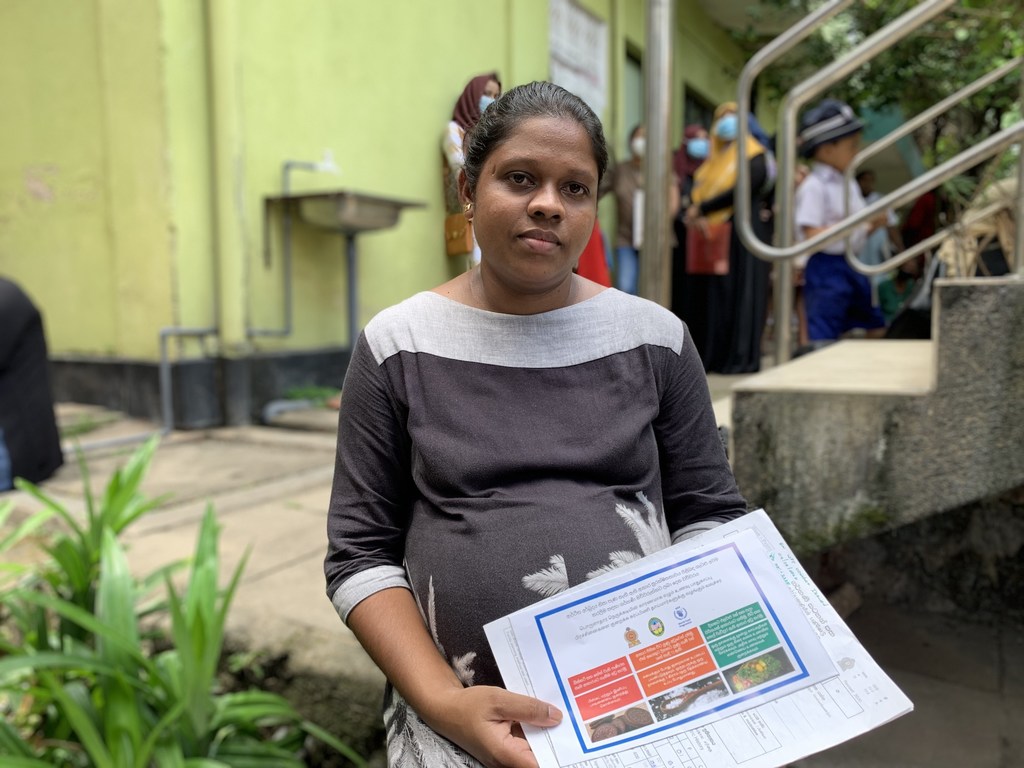 “Our life has become more difficult these days. Everyone is facing economic hardships without fuel and high prices, but we (pregnant women) are finding it even more difficult,” she says sitting on a concrete platform, with other women.

Her resilience is remarkable as she patiently explains what the voucher means to her.

“This is a huge support for pregnant women like me. It will not only help me but my unborn baby as well. I would like to spend this voucher to buy healthy food such as lentils, and fruits for me and my baby,” Dushanthi adds.

Though these vouchers are specifically for supporting pregnant women facing a critical nutrition gap, it is clear that this will be used to support the whole family, as the need is too great.

In Dushanti’s case, it will be her child, both parents, and husband, who hasn’t got daily wages for a while now.

© WFP/Parvinder Singh
Vouchers are distributed to women so that they can access basic nutrition.

Three in 10 Sri Lankans are food insecure amid the country’s worst economic crisis since independence in 1948. Pregnant and breastfeeding women, children under five, and people with disabilities, are among the worst affected.

The Government’s efforts to maintain critical assistance programmes are seriously constrained by the economic crisis. Women and children who had benefitted from national social safety net programmes, are left without this crucial lifeline and are at grave nutrition and health risks.

The flagship Thriposha nutritional support programme for pregnant and breastfeeding mothers and young children is stalled. Coupled with income losses and inflation, this could lead to higher rates of malnutrition for women and their children.

Udeni Dematapaksha, special head nurse at the Kuppiyawatta maternal health clinic, is acutely aware of the struggle these mothers are going through, and one can sense a hint of despair in her voice.

“In the past, we used to give Thriposha support to pregnant women and nursing mothers. But since January they are not receiving it. Today we are distributing vouchers for pregnant mothers, and this is very valuable,” the head nurse says.

A young Midwife, Tarni, is quick to add the irony that they are confronted with, for they must list down nutritious food and fruits that pregnant women must take for their health and that of their unborn child, despite knowing that most of them are out of reach.

“Many families do not cook anymore and are resorting to arranging poor quality meals from different places as that is all they can afford. These are difficult times, and we are concerned about the mothers,” she adds.

Even before the ongoing crisis and the COVID-19 pandemic, Sri Lankan women and children suffered from far higher rates of malnutrition than most other middle-income countries: 17 percent of children under 5 were too short for their age (stunted) and 15 percent were too thin for their height (wasted), a figure which is considered ‘very high’ in WHO classification.

“Focusing on vulnerable populations and communities is a priority to avert a humanitarian crisis,” says Indu Abeyratne, Activity Manager with WFP Sri Lanka, who is closely engaged with the roll-out of the emergency response.

Every woman we meet at the distribution outlet has a fair idea of what they would like to use the vouchers for. Some of these would be basic and staple in ordinary times but are now out of reach – such as the young pregnant woman who listed papaya as her first buy, as she has been craving it.
“The food voucher is the first of the many nutritional support interventions that these women would need. But they are filled with hope as they hold the vouchers,” adds Abeyratne.

WFP will be reaching out to almost 1.5 million people in need of emergency food assistance through food, cash, or vouchers.

While boosting the existing social safety net to assist one million children through the national school meal programme, there will be a million targeted beneficiaries as part of a government initiative that provides fortified food to mothers and children.

Nearly 6.3 million people are food insecure and in need of assistance. WFP’s recent surveys indicated that 61 percent of families are resorting to at least one coping mechanism, including eating less, eating less nutritious food, and even skipping meals altogether.