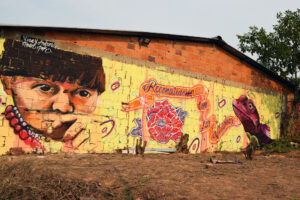 “Serious threats, including death threats, are commonplace in Colombia for defenders who raise concerns about corporate activity, in particular in land-intensive industries,” said Mary Lawlor, UN Special Rapporteur on the situation of human rights defenders, in a statement issued on Thursday.

🇨🇴#Colombia: Human rights defenders who raise concerns about business projects are under serious threat, say UN experts. The incoming Government must do much more to protect them.

The experts drew attention to the situation of Pedro Jose Velasco Tumiña, an indigenous Misak defender who has been receiving threats for his advocacy on land issues.

Since last July, members of the Misak and Nasa indigenous peoples, as well as campesino communities, have held protests in the Cauca Department, located in the southwest, on land owned by Smurfit-Kappa, a world leader in paper packaging.

As of 2021, the Irish company controlled over 67,000 hectares in Colombia, mainly comprised of pine and eucalyptus plantations.

The protesters have denounced the negative impacts of Smurfit-Kappa’s use of land in the country on human rights and the environment. They are advocating for the just implementation of land reform provisions under the historic 2016 Peace Agreement that ended five decades of conflict with FARC rebels in Colombia.

The indigenous communities assert their right to reclaim land owned by Smurfit-Kappa in line with the UN Declaration on the Rights of Indigenous Peoples.

Mr. Velasco Tumiña began receiving death threats in August 2021, the experts said. He even travelled to the Irish capital, Dublin, earlier this year to communicate his concerns to the company. Upon returning home, he received another death threat.

The experts said at least one person has been killed since the land movement began, with a man allegedly shot by security forces during a protest last August.

“The State must fulfil its responsibility to protect human rights and investigate any allegations of violations,” they said. “The threats against Pedro are horrendous and must be taken seriously, as must the issues he and others are raising.”

The UN experts also offered advice to the new Colombian government which takes office on Sunday.

“In order to ensure businesses respect human rights, the incoming Government should encourage companies to engage constructively with human rights defenders. Companies, for their part, should publicly state their willingness to do so, even if the defenders’ advocacy concerns the company’s own operations,” they said.

The experts who issued the statement were Ms. Lawlor; Francisco Cali Tzay, UN Special Rapporteur on the rights of indigenous peoples, and members of the Working Group on Business and Human Rights.

They received their mandates from the UN Human Rights Council, which is located in Geneva. They serve in their individual capacity and are neither UN staff, nor are they paid for their work.