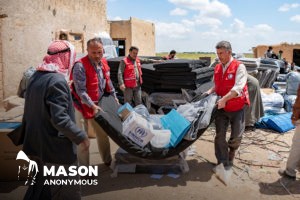 “Three million people in Idlib need protection”, Najat Rochdi, Senior Humanitarian Adviser to the UN Special Envoy for Syria, said in a statement, adding that there was “grave danger” of a “humanitarian catastrophe” if the violence fails to end.

Attacks and fighting are also impacting civilians in Government-controlled areas.

“Let me be clear”, said Ms. Rochdi, “the protection of civilians is paramount”.

In #Idlib north western #Syria, families displaced by ongoing hostilities set up a makeshift camp in Aqrabat near the Turkish border. #Eid al-Fitr is meant to be observed over a large meal with family and friends, not in fear searching for safety.

She maintained that combatting terrorism – a justification often used by pro-Syrian Government forces for the assault on the last rebel-held area of Syria – “does not absolve any party from its legal obligations” to prevent attacks against civilians and civilian infrastructure.

“All warring parties must uphold their obligations under international law, and immediately stop attacks on civilians and civilian infrastructure, including medical facilities, schools, markets and places of worship, which may amount to war crimes”, she spelled out.

The Humanitarian Adviser underscored the principle of collective responsibility towards the victims of the conflict, “many of whom are too young to try to make sense of this senseless war”.

While the UN welcomed news that some 1,000 people and 526 third-party nationals have left the hugely-overcrowded Al Hol camp in the country’s northeast, it noted that the people who remain displaced there also need urgent protection and assistance, saying that “a durable solution is required”.

Ms. Rochdi reminded all parties that under international law, all children, including those suspected of being associated with armed groups and or terrorist organizations, “are entitled to special care and protection

“These children are victims, and must be treated first and foremost as such”, Ms. Rochdi stressed.

Due to a desperately short supply of basic goods and services, the situation for 29,000 people in the Rukban settlement near the Jordanian border, remains “critical”, she said, adding that it had been more than four months since they last received assistance.

“I call again today on Member States with influence to facilitate the immediate delivery of assistance to people in Rukban, and to support the UN’s request to assist those transiting to collective shelters and to people who have returned to (their) areas of origin”, stated Ms. Rochdi.

She appealed again on Thursday to the international Task Force members’ humanity to “deliver on their commitment and spare civilians who have already suffered for so many years, calling humanitarian assistance in Syria “a lifeline”.

“Urgent meaningful and concrete actions are needed”, she concluded. “It’s not only a humanitarian imperative, it’s a duty”.