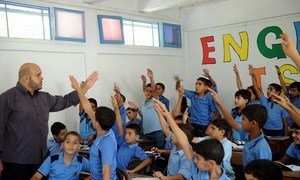 The work of the UN body responsible for assisting Palestine refugees, UNRWA, which has allowed millions of children to receive an education that promotes UN values of human rights and tolerance, as well as democracy and conflict resolution, should be viewed “not only as our common responsibility, but as our common success”, said Secretary-General António Guterres on Tuesday.

The UN chief was speaking at the opening of the 2019 pledging conference for UNRWA, officially the Relief and Works Agency for Palestine Refugees in the Near East, alongside the President of the General Assembly, María Fernanda Espinosa Garcés, and the agency’s Commissioner-General, Pierre Krähenbühl.

And here’s our interview with Matthias Schmale, the head of UNRWA, on the humanitarian situation in Gaza: 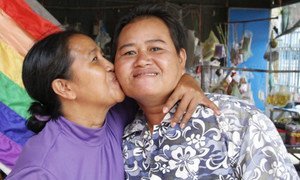 While women’s rights have advanced over the decades, gender inequalities and other fundamental human rights violations within families persist, according to a flagship study released on Tuesday, from the UN’s gender empowerment agency.

UN Women’s new report, “Progress of the World’s Women 2019-2020: Families in a Changing World”, shows that families, in all their diversity, “can be critical drivers of gender equality, provided decision-makers deliver policies rooted in the reality of how people live today, with women’s rights at their core”, said UN Women Executive Director Phumzile Mlambo-Ngcuka.

Find out more about the findings of the report here. 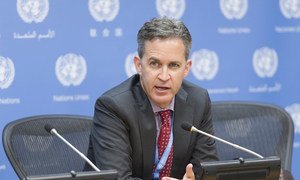 Surveillance technology should be banned immediately until “effective” national or international controls are put in place to lessen its harmful impact, a UN-appointed independent rights expert said on Tuesday.

David Kaye, who’s the United Nations Special Rapporteur on freedom of opinion and expression, made the appeal as he prepared to present his latest report to the Human Rights Council in Geneva. 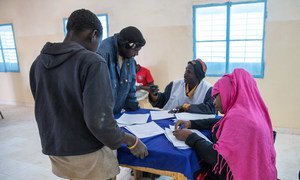 Nearly 20,000 people have been rescued from the desert in Niger since 2016 after trying to reach North Africa and being abandoned by traffickers, the UN migration agency IOM said on Tuesday.

Ten days ago, IOM found more than 400 migrants in the Tenéré desert, among them seven women and four children.

In Geneva, spokesperson Joel Millman said that although the migrant routes were not a secret, it was extremely difficult for rescuers to find migrants, whose trucks often break down or who are simply abandoned:

“We know that probably thousands of victims and the remains aren’t even evident because they’re covered by sand or consumed by animals. We can only rely on luck, I would say mostly, and the ability to get resources marshalled. Sometimes local authorities can be really helpful, sometimes resources are really stretched. So it’s a big region and we do our best with the knowledge we’re given at any given month.”

In the latest rescue mission, Mr. Millman said that migrants had come from 14 West African countries, mainly Guinea, Mali and Côte d’Ivoire. Of all those rescued, 98 per cent opted for voluntary return to their countries of origin, he noted.

Concern over slow decline of malnutrition in India 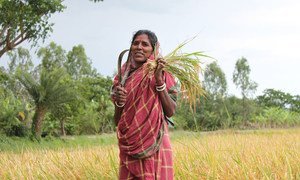 And finally to India, where the World Food Programme (WFP) has warned that despite progress in combating malnutrition, more than three in 10 children are stunted in much of the country.

According to WFP, large numbers of India’s 1.3 billion people do not get enough vitamin A, iron and iodine, especially women and children.

Prolonged periods without an adequate diet can have an irreversible impact on a child’s physical growth and brain development, the agency says.

This is despite the fact that India is self-sufficient in food grain production and has seen a large increase in rice, wheat and cereal production.

In a report published jointly by WFP and the Indian Government assessing the country’s progress towards achieving zero hunger by 2030, it notes that in the last decade, the body mass of Indian women and men dropped by 10 per cent 14 per cent respectively.

While stunting has declined by one fifth in India in the last decade, it is still seeing the slowest rate of decline of other emerging economies and most countries in Asia, WFP says.

Listen to or download our audio News In Brief for 25 June on SoundCloud: