Despite a sustained UN-led and international diplomatic push to avert military action in Ukraine, Russia’s President Vladimir Putin did just that – triggering a barrage of reactions, beginning with the UN chief, condemning the move and appealing for peace.

“All Members shall refrain in their international relations from the threat or use of force against the territorial integrity or political independence of any state, or in any other manner inconsistent with the Purposes of the United Nations,” he said, quoting the Charter.

Wrong but not irreversible

He underscored that the use of force by one country against another is “the repudiation of the principles that every country has committed to uphold”, which he stated, applies to the present military offensive.

“It is wrong. It is against the Charter. It is unacceptable. But it is not irreversible”, the UN chief said.

He went on to repeat the appeal he made to Russian President Vladimir Putin last night.

“Stop the military operation. Bring the troops back to Russia”, he reiterated.

As deaths rise, and images of fear, anguish and terror in every corner of Ukraine are pervasive, the top UN official reminded that “people – everyday innocent people – always pay the highest price”.

This is why the UN is scaling up its humanitarian operations in and around Ukraine.

“Today I am announcing that we will immediately allocate $20 million from the Central Emergency Response Fund to meet urgent needs,” he flagged, reiterating that the UN and its humanitarian partners are “committed to staying and delivering, to support people in Ukraine in their time of need”.

He informed the reporters that UN staff are working on “both sides of the contact line,” providing lifesaving humanitarian relief to people in need, “regardless of who or where they are”.

“The protection of civilians must be priority number one”, he stressed.

The UN chief restated that international humanitarian and human rights law must be upheld, noting that the decisions of the coming days “will shape our world and directly affect the lives of millions upon millions of people”.

“In line with the Charter, it’s not too late to save this generation from the scourge of war,” concluded the Secretary-General, “we need peace”.

In his statement, General Assembly President Abdulla Shahid recalled that the Charter is based on the principle of sovereign equality and calls for Member States to settle their international disputes by peaceful means.

“The ongoing military offensive by Russia in Ukraine is inconsistent with the principles of the Charter,” he said, renewing his call to all Member States to uphold their obligations.

#Ukraine: "The protection of the civilian population must be a priority. The use of explosive weapons in populated areas should – at all costs – be avoided." – UN Human Rights Chief @mbachelet: https://t.co/tOmP1tugQk#Russia pic.twitter.com/7kpTgZUF3p

“I call for an immediate ceasefire, de-escalation of tensions and a firm return to diplomacy and dialogue. The safe and unhindered access for humanitarian assistance to Ukraine and its people is a priority and the need of the hour.”

Prior to the media briefing, UN High Commissioner for Human Rights Michelle Bachelet issued a statement on the military attack.

“Civilians in various parts of Ukraine were awoken by sounds of heavy bombardment and are terrified of further escalation, with many fleeing their homes,” she said. “This military action clearly violates international law and puts at risk countless civilian lives. It must be immediately halted.”

Ms. Bachelet reminded that States failing to take all reasonable measures to settle their international disputes by peaceful means “fall short of complying with their obligation to protect the right to life.”

Reports have emerged of military strikes near major cities with significant populations, including Kharkiv, Kramatorsk, Odesa, Mariupol and the capital, Kyiv.

“The protection of the civilian population must be a priority. The use of explosive weapons in populated areas should – at all costs – be avoided,” underscored the High Commissioner.

The UN Human Rights Monitoring Mission remains in the country and will continue to closely monitor and report on the situation.

The UN human rights chief also warned of “an information war” under way.

“It is particularly crucial at this time that we continue to closely monitor and attempt to verify reports of human rights violations, including civilian casualties, damage to civilian objects, including critical infrastructure, and other impact on human rights on the ground,” she upheld. 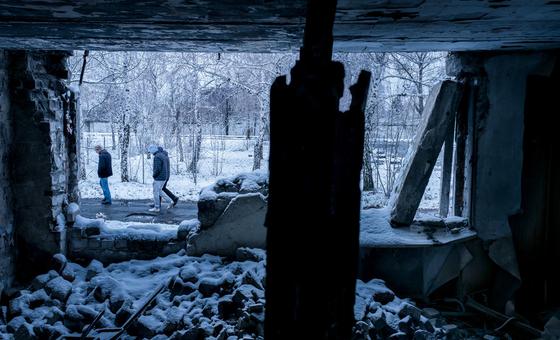 “As we try to understand the evolving situation in different parts of the country… we are here to support the people exhausted by years of conflict and we are prepared to respond in case of any increase in humanitarian needs,” she said in a statement.

“Our aim is always to provide the most vulnerable civilians with critical humanitarian relief supplies and services, regardless of who or where they are,” she assured.

Also expressing its deep concern, the UN Educational, Scientific and Cultural Organization (UNESCO) called for respect of international humanitarian law –notably the 1954 Hague Convention for the Protection of Cultural Property in the Event of Armed Conflict and its two Protocols, “to ensure the prevention of damage to cultural heritage in all its forms”.

This includes the obligations under the Security Council Resolution 2222 on the protection of journalists, media professionals and associated personnel in situations of conflict, to promote free, independent and impartial media as one of the essential foundations of a democratic society, and which can contribute to the protection of civilians.

Finally, UNESCO also called for “restraint from attacks on, or harm to, children, teachers, education personnel or schools, and for the right to education to be upheld”.

At the same time, the UN Children’s Fund (UNICEF) echoed the Secretary-General’s appeal for an immediate cease-fire and called on all parties to respect their international obligations to protect children from harm, and to ensure that humanitarian actors can safely and quickly reach children in need.

“UNICEF also calls on all parties to refrain from attacking essential infrastructure on which children depend – including water and sanitation systems, health facilities and schools,” added UNICEF Executive Director Catherine Russell.

© UNICEF/Ashley Gilbertson
A young girl sites in a bomb shelter in the basement of her school in Donetsk Oblast, Ukraine. (file)

The World Food Programme (WFP) expressed deep concern “for the impact of hostilities on the lives and livelihoods of civilians.”

“As the situation evolves, there is a need to ensure that affected communities have continued access to any humanitarian support they may require and that the safety of humanitarian staff on the ground is guaranteed,” said WFP Director of Emergencies Margot van der Velden.

Taking to social media, WFP chief David Beasly tweeted that “And just when you think it can’t get any worse, the world wakes up to a conflict in Ukraine.”

He pointed out that the military action is likely to cause economic deterioration around the world especially for countries like Yemen, dependent on wheat imports from Ukraine and Russia.

“Prices will go up compounding an already terrible situation,” he lamented.

The International Atomic Energy Agency (IAEA) drew attention to the Chornobyl Nuclear Power Plant, saying that “Ukraine has informed the IAEA that ‘unidentified armed forces’ have taken control of all facilities of the State Specialized Enterprise Chornobyl NPP, located within the Exclusion Zone,” adding that no casualties nor destruction had occurred at the industrial site.

“It is of vital importance that the safe and secure operations of the nuclear facilities in that zone should not be affected or disrupted in any way,” Director General Rafael Mariano Grossi said in a statement.

UN High Commissioner for Refugees Filippo Grandi expressed grave concern over the “fast-deteriorating situation and ongoing military action in Ukraine,” and called on neighbouring countries to “to keep borders open to those seeking safety and protection.”