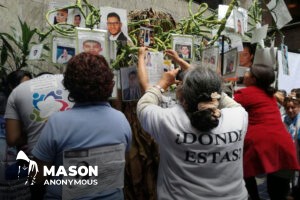 The urgent action procedure allows families, relatives and representatives of disappeared persons to submit a request to CED after having reported the disappearance to relevant national authorities.

Nearly half of the requests, or 49 per cent, concern disappearances in Iraq, while 42 per cent are cases in Mexico.

“Behind each urgent action request, there is a human tragedy. The whole family of the victim suffers from the absence of their loved one and from the uncertainty as to whether the victim is still alive. As time passes, the chance of finding the person alive reduces and the grievance increases”, Committee members said.

The CED monitors countries’ adherence to the International Convention for the Protection of all Persons from Enforced Disappearance which nearly 100 nations have signed, while 63 are states party.

The urgent actions procedure enables the Committee to swiftly engage with countries by providing recommendations on measures to search for disappeared persons and to investigate the surrounding circumstances.

As the process only takes 24 to 48 hours, it is “a quick and reactive mechanism”, members said, as time is of the essence when someone disappears.

The CED also may ask States to adopt interim measures to protect complainants, families and witnesses who may suffer reprisals for their involvement in the search for the disappeared.

Confident more victims will be found

So far, 90 people in 11 countries have been located through the urgent action procedure. Those nations are Iraq, Mexico, Morocco, Argentina, Togo, Sri Lanka, Kazakhstan, Mauritania, Bolivia, Cuba and Cambodia.

One of the more recent cases concerned  three land defenders from an indigenous community in Chiapas, Mexico, who disappeared on 8 June.  Family members suspected that a paramilitary group, which allegedly acted with the consent of government officials, was involved as the group had threatened, abducted and killed community members in the past.

The CED sent an urgent action request to Mexico on 12 June, resulting in the establishment of a task force consisting of state and civil society representatives to negotiate with the paramilitary group. The victims were released two days later.

CED members are confident that more victims worldwide will be found in the coming weeks and months, but stressed that this will require the active cooperation of state authorities, coordination of search and investigation procedures, and involvement of relatives of the disappeared.

Members were appointed by the UN Human Rights Council and are neither staff members of the Organization, nor do they receive a salary.