Mr. Tedros was speaking at a press conference in Geneva, at the conclusion of a two-day research and innovation forum on COVID-19, during which leading health experts from around the world met to assess the current level of knowledge about the new disease, identify gaps and work together, so that critical research can begin immediately.

These include decisions surrounding easy to apply diagnostics, the best approaches for infection prevention, potential therapies that could be used to treat patients, existing vaccine candidates and how to accelerate them, and what Mr. Tedros described as the “infodemic” – the overwhelming quantity of information, being produced and disseminated worldwide.

The WHO is extending investigations into the source of the virus (which is still undetermined), added Mr. Tedros, and continuing to support countries with the tools to diagnose cases and protect health workers, including personal protective equipment.

As of Wednesday morning, Geneva time, there were 44,730 cases of COVID-19 in China, with 1,114 deaths. In the rest of the world, the figure was 441 cases, and one death. Although the number of newly confirmed cases has stabilized in China, Mr. Tedros cautioned that the outbreak “could still go in any direction”.

A time for solidarity, not stigma 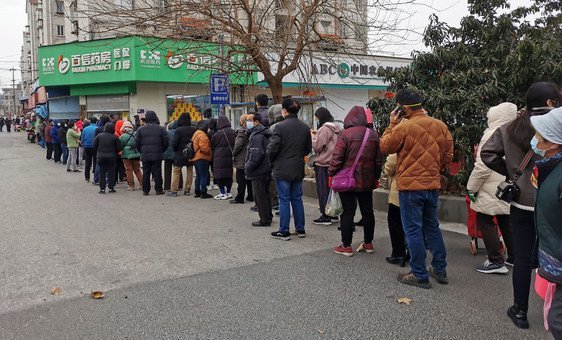 The head of WHO renewed a call for international solidarity, praising the Cambodian Government’s decision to allow the Westerdam cruise ship, which had been stranded for several days, to dock in the country, as an appropriate response to the outbreak.

Other ships, however, are still affected. Most of the new cases confirmed outside China (40 out of 48) are on the Diamond Princess cruise ship, which is currently quarantined of Yokohama, Japan. Three cruise ships have either experienced delayed port clearance or have been denied entry to ports. Often, said Mr. Tedros, without an evidence-based risk assessment.

WHO is working closely with the UN agency responsible for regulating shipping, the International Maritime Organization (IMO), as well as shipping industry bodies, to provide countries with accurate information and advice on the virus, and has published guidance on how to handle public health events on ships.

IMO and WHO will issue a joint communique calling on all countries to respect the principle of “free pratique”, whereby a ship may enter a port based on assurances from the captain that the vessel is free from contagious disease.

“Outbreaks can bring out the best and worst in people”, said Mr. Tedros. “Stigmatizing individuals or entire nations diverts our attention and turns people against each other”.

Countries should also react in proportion to the health risks when it comes to air travel, said the head of the UN aviation agency ICAO (the International Civil Aviation Organization), in an interview with UN News.

Noting that some airlines have suspended some or all of their direct flights to China for the coming weeks, Fang Liu, Secretary-General of ICAO, said it was unfortunate that misinformation surrounding contagious disease outbreaks, often led some industry leaders to over-react.

“Undue restrictions can have the effect of increasing fear and stigma”, said Ms. Liu, “but do very little in terms of public health benefit.”

The ICAO chief pointed out that manufacturers, airlines and airports had been taking special precautions to minimize the risk to air travellers of being infected by the virus, and that while ICAO’s core role is to help governments to connect the world, in times such as these “the health and safety of the travelling public must be of paramount priority”.

ICAO itself has published two public health and travel advisories, added Ms. Liu, and will continue to monitor the situation closely.

The civil aviation body also plans to release a letter reminding countries of their obligation to draw up national aviation plans in the event of any international health emergency.