In a heartfelt statement released on Tuesday night, António Guterres said Brigadier Edjeani-Afenu “made history in peacekeeping as the first female Deputy Force Commander in the United Nations Mission for the Referendum in Western Sahara (MINURSO).”

Through a more than four-decade career, she also served in UN peacekeeping operations in Lebanon (UNIFIL), the Democratic Republic of Congo (MONUSCO) and Liberia (UNMIL).

We are saddened to learn of the passing of former MINURSO Deputy Force Commander, Brigadier General Constance E. Edjeani-Afenu 🇬🇭.

“Brigadier Edjeani-Afenu will be remembered for her distinguished service in these missions, as well as her tireless work to promote inclusiveness and increase the number of women in the peacekeeping operations where she served”, Mr. Guterres said.

The UN chief concluded offering his heartfelt condolences to her family, to the people and the Government of the Republic of Ghana.

In a post on the website Medium, UN Peacekeeping said Ms.Edjeani-Afenu’slegacy “lives on and the impact of her work and achievements as a pioneer for women in peacekeeping, will continue to inspire many.”

For UN Peacekeeping, Brigadier Edjeani-Afenu was a true trailblazer.

As a woman who shattered many glass ceilings within her national military and four different UN missions, she worked successfully to promote gender inclusiveness and increase the number of women serving.

“Having first-hand experience as a Military Observer with MONUSCO (2003–2004), Constance focused relentlessly on improving the conditions of service of MINURSO’s Military Observer personnel, a legacy that she leaves behind”, said the department.

Brigadier General Edjeani-Afenu rose through the ranks of her national military to become the first female Commanding Officer in the Ghanaian Armed Forces, in 1999.

In 2013, she became the first woman to be appointed Deputy Military Adviser (DMILAD) at the Permanent Mission of Ghana to the United Nations in New York.

While on the post, she was promoted to the rank of Brigadier-General, becoming the first female to ever be promoted as a General in her country’s Armed Forces.

In 2019, she became the first female Deputy Force Commander to serve with MINURSO, where she served with honour and distinction until her passing.

The Brigadier General is remembered by her MINURSO colleagues as a “true inspiration” with a remarkable smile and infectious laugh.

According to them, she always made time to chat, share a laugh, encourage colleagues and share advice, and she never passed up an opportunity to dance. 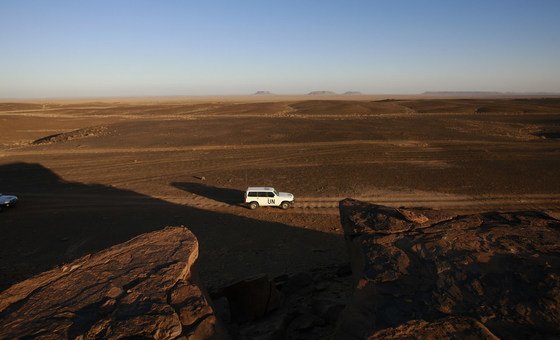 In 2019, Brigadier General Edjeani-Afenu became the first female Deputy Force Commander to serve with MINURSO, where she served until her passing, by UN Photo/Martine Perret

She inspired and mentored generations of soldiers and officers, and will be dearly missed, they say.

The First Lady of Ghana, Rebecca Akufo-Addo, highlighted “a life of resilience and breaking barriers, a shining example of what women can do.”

The United Nations in the country said her service to Ghana and the world was “profound” and that “we have lost a treasure.”

The Under-Secretary-General for Peace Operations, Jean-Pierre Lacroix, said he was deeply saddened by the news of her passing, calling her a pioneer whose “legacy will continue to inspire many women and men.”

The Brigadier General is survived by her husband, three children, and two grandchildren.