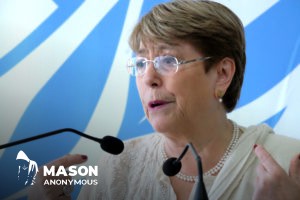 Ms. Bachelet also said that after reviewing the information she has received from a UN Office of Human Rights (OHCHR) mission dispatched to the from 21 October to 8 November, there was a need for an independent, impartial and transparent investigations into allegations of human rights violations and abuses committed during the protests from 3 to 13 October.

On the findings of the OHCHR investigative team, Ms. Bachelet that according to the data collected, during the 11 days of social unrest (from October 3 to 13), at least nine people died and 1,507 were injured, including 435 members of the security forces. The number of detainees amounted to 1,382. There are allegations that many of these people were arbitrarily detained.

“Last month’s unrest had a high human cost,” the High Commissioner said. “People should be able to express their grievances without fear of being hurt or arrested. At the same time, it is important that protestors do not resort to violence.”

According to OHCHR, the team received reports from victims and witnesses of use of force by law enforcement officials that was not in conformity with international norms and standards, including unnecessary and disproportionate use of force. Law enforcement officials included the police and the military, which was deployed following the declaration of a state of exception.

Victims and witnesses informed the team that teargas and pellet rounds were regularly shot by the security officers directly at the protesters at very close range, causing hundreds of injuries, and possibly some of the deaths.

While acknowledging that the Public Prosecutor’s Office and the Police have opened 17 and 31 investigations respectively, Ms. Bachelet stressed the importance of investigating the circumstances of all deaths and serious injuries. She added that it is imperative that the internal protocols regarding the use of force for law enforcement officials are reviewed and that the authorities ensure they comply with international standards.

Regarding the triggers of the crisis, the UN Human Rights Office strongly recommends that the Government promote a participatory approach to decision-making, ensuring the enjoyment by people of their right to participate in public affairs.

Such a strategy of participation should be extended to economic and fiscal measures – including on proposals of austerity measures – and especially with the communities likely to be worst affected. This, Ms. Bachelet said, would be in line with the view of the UN Committee on Economic, Social and Cultural Rights which recommended that Ecuador ensure that any economic decisions affecting people should be taken in a transparent manner and in consultation with the affected population.

The historical and persistent discrimination against indigenous peoples should also be a matter of concern and priority for the Government. The High Commissioner urged the authorities to do their outmost to identify effective measures to deal with this problem, and to recognize that it is a barrier to overcoming structural economic inequalities.

“Social and economic inequality remains a structural barrier for development for vast sectors of society, who have felt left behind for generations and do not see positive prospects for the future,” Ms. Bachelet said.

“It is of paramount importance that society as a whole, with the Government as a guiding force, embark together in search of paths of mutual understanding with the aim of constructing an inclusive, multicultural and peaceful society.”