The UN agency has supported a community-based health care organization called Maedot, which has established a Maternity Waiting Home at a camp for people displaced by the ongoing conflict between Ethiopian government troops and the Tigray People’s Liberation Front (TPLF).

“They have saved my life and that of my daughter,” said Selam, the first mother to deliver at the Sabacare 4 camp. “I stayed under their care the whole night and delivered my baby girl safely.” 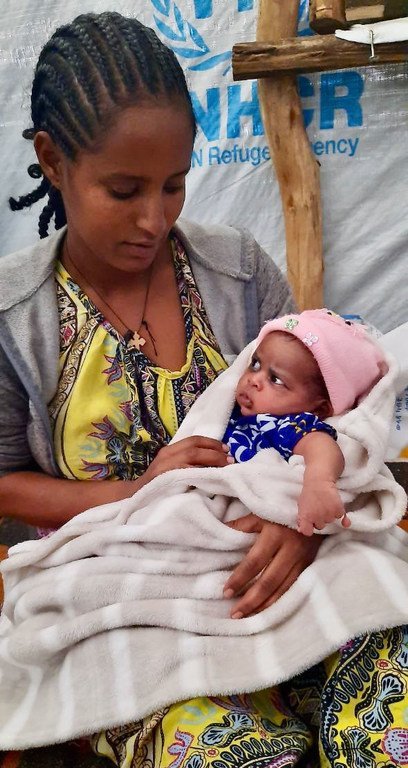 © UNFPA Ethiopia
Selam with her daughter Maedot after giving birth safely at the Maternity Waiting Home which is supported by UNFPA at the Sabacare 4 internally displaced site in Mekelle, Tigray.

After living for months in a school classroom with nearly 40 other households, Selam, together with her husband and daughter, were voluntarily relocated to the camp, which was set up temporarily at the outskirts of Mekelle, the capital of Tigray.

UNFPA said childbirth can have a terrible ending, particularly for young women dealing with the added weight of displacement, malnutrition and limited access to sexual and reproductive health services.

“My labour started in the middle of the night. I was scared. We came to the Maternity Waiting Home and they tried to refer me to a hospital but there was no ambulance or any other vehicle. I was so afraid to lose my child,” Selam recalled.

“If they weren’t here that night, I will not be here today. I have named my daughter ‘Maedot’ to honor them for saving our lives.”

The reality is stark for pregnant women like Selam in Tigray, where a year of brutal war has left some 5.2 million people in need of humanitarian relief.  The Ethiopian Government recently declared a state of emergency after TPLF troops began advancing south towards the national capital, Addis Ababa.

The UN political affairs chief, Rosemary DiCarlo, told the Security Council in New York this week that the crisis has reached “disastrous proportions”, warning that the risk of Ethiopia “descending into widening civil war is only too real.”

Meanwhile, nearly 118,000 women in Tigray are estimated to be currently pregnant and at increased risk of maternal mortality and morbidity due to limited or no access to maternal healthcare in the region, according to UNFPA.

Amid grinding challenges, Maedot set up the Maternity Waiting Home, with the UN agency’s support, to provide much-needed life-saving maternal health services at the Sabacare 4 camp.

“UNFPA kits and medical equipment including the solar panel for electricity have been very helpful to provide emergency care day and night,” said Rahwa Gedamu, a nurse at the camp’s clinic.

‘The situation is grave’

As the Tigray conflict enters a second year, midwife-based interventions are critical in a situation where more than half of the facilities are not functional and 60 per cent of pregnant and lactating mothers are suffering from malnutrition.

“We receive between 10 to 15 cases on a daily basis from which at least two of them are critical. The situation is grave,” said Dr. Fiseha Gebreegziabher Maedot.

Staff are working around the clock, Ms.Gedamu added. “I used to work at a hospital in Mai Kadra before I fled to Mekelle. Since then, I have been giving voluntary health service day and night for almost a year to save the lives of women.”

After partnering with Maedot on the Maternity Waiting Home in Mekelle, which received SRH kits and other medical equipment, UNFPA is now exploring the expansion of service provision through an additional home in Adigrat.

Despite the dire situation, all the personnel in Maedot say their work is very fulfilling. “Every time we save a life like Selam and her daughter’s, we feel very proud and motivated to continue serving our people, said Ms.Gedamu.