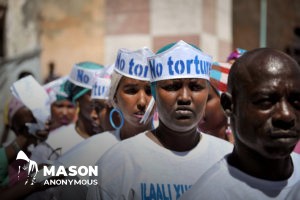 Mutilation, cruel treatment and torture are war crimes and crimes against humanity. Join us in marking 26 June the @UN International Day in Support of #VictimsOfTorture. #unite to put an end to impunity for the perpetrators of the most serious crimes. #humanityagainstcrimes pic.twitter.com/gOcPdae8Ye

This was part of his message for the International Day in Support of Victims of Torture, on Wednesday, describing the despicable act, as a vicious attempt to break a person’s will.

The United Nations has long condemned torture as one of the vilest acts perpetrated by humankind, saying that it seeks to “annihilate the victim’s personality” and denies the inherent dignity of the human being. Despite its absolute prohibition under international law, torture persist in all regions of the world and is often uses around national and border security.

Moreover, its pervasive consequences often go beyond the isolated act on an individual; and can be transmitted down through generations, leading to cycles of violence and revenge.

Currently ratified by 166 States, the UN chief said he was “encouraged that we are moving towards universal ratification of the United Nations Convention against Torture”, which aligns national laws and practices with the Convention to move the prohibition of torture from principle to practice.

He explained that the UN Subcommittee on Prevention of Torture “does exactly that”, by visiting prisons and other institutions and interviewing detainees, officials, law enforcement personnel and medical staff every year, in close partnership with national preventive mechanisms.

“In all our work, we must support victims and ensure respect for their right to rehabilitation and redress”, the UN chief stressed, noting that “this victim-centred approach guides the UN Voluntary Fund for the Victims of Torture”, which assists nearly 50,000 victims annually, in some 80 countries.

Moreover, he said it has also helped in understanding better the different dimensions of torture, including the use of sexual and gender-based violence, and the specific assistance that different kinds of survivors of torture need.

“On this International Day in Support of Victims of Torture, I urge all States to end impunity for perpetrators and eradicate these reprehensible acts that defy our common humanity.