Mr. Pedersen said that he had conveyed his disappointment to the members of the Small Body of the Committee – which comprises 45 delegates (the full body contains 150 members, drawn from representatives of the Government, opposition groups, and civil society) tasked with drafting a new Syrian constitution – in frank terms.

“I told the 45 members of the drafting body that we can’t continue like this, that the week has been a disappointment. I set out a few things I thought we should be able to achieve before we started this meeting, and I am afraid we did not manage to achieve these things”, said Mr. Pedersen. “I believe the reason for that is that there has not been a proper understanding on how we are going to make progress in the Committee”.

During a Security Council briefing on 20 January, Mr. Pedersen signalled his low expectations of Friday’s meeting, the fifth time that the Small Body has come together, warning that the political process is not delivering real change, and that free and fair elections “seem far into the future”.

Citing disagreements on process between the two Co-Chairs, representing the Syrian Government and the opposition, Mr. Pedersen said that a new approach to the talks is needed, if they are to continue. 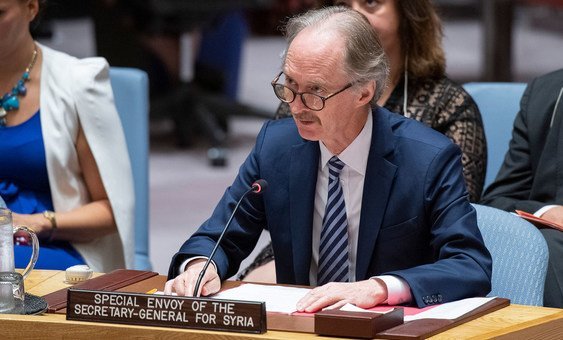 Given the current state of the talks, Mr. Pedersen said that he was not able to announce a date for a sixth session. The Special Envoy’s upcoming plans include a potential trip to the Syrian capital, Damascus, to hold talks with the Government, as well as discussions with the Turkey-based Syrian National Council, an opposition coalition, and meetings with representatives of countries including Russia, Iran, Turkey and the US.

Syria has been beset by brutal conflict, economic collapse, and a disastrous humanitarian crisis for some ten years. The UN humanitarian office, OCHA, estimates that around 80 per cent of the population lives in poverty, and civilians face a range of dangers, from instability, arbitrary detention and abduction, to criminality and the activities of terrorist groups.

Mr. Pedersen announced that he will update the Security Council on the situation in Syria, on 9 February.