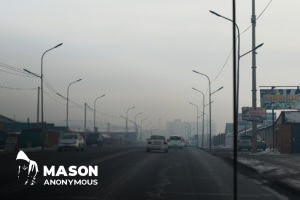 Ahead of the 2019 World Environment Day on Wednesday, which has air pollution as its theme, David Boyd, the UN’s Special Rapporteur on human rights and the environment, called on states to take urgent action to improve air quality in order to fulfill their human rights obligations.

Air pollution is a deadly, man-made problem, responsible for the early deaths of some seven million people every year, around 600,000 of whom are children. It is estimated that 90 per cent of the world’s population breathe polluted air.

Every five seconds, somebody around the world dies prematurely as a result.

In a statement, Mr. Boyd said that uncontaminated air is a core component of the right to a healthy environment, together with clean water and adequate sanitation, healthy and sustainably produced food, a non-toxic environment, healthy biodiversity and a safe climate.

“The right to a healthy environment is fundamental to human well-being and is legally recognized by over 150 States at the national and regional levels. It should be globally reaffirmed to ensure the enjoyment of this right by everyone, everywhere while upholding the human rights principles of universality and non-discrimination.”

Mr. Boyd described the efforts of China, host of this year’s World Environment Day, to tackle air pollution, as a “success story.” Although the Chinese capital, Beijing, has become synonymous with dirty air over the past few decades, a concerted effort by local and regional authorities has seen an improved situation in recent years, with the concentration of fine particulates – the tiny, invisible airborne particles that are largely responsible for deaths and illnesses from air pollution – falling by a third.

© UNICEF/Bindra
Vehicle emissions, diesel generators, the burning of biomass and garbage have all contributed to poor air quality in Lagos Lagoon in Nigeria. (file 2016)

World Environment Day, celebrated since 1974, is the United Nations day for encouraging worldwide awareness and action to protect the environment. It is organized around a theme that addresses a particularly pressing environmental concern.

In a video message released ahead of the Day, UN Secretary-General António Guterres said that, as well as claiming millions of lives every year, and damaging children’s development, many air pollutants are also causing global warming. Mr. Guterres called climate change an “existential threat,” and pressed the international community to “tax pollution, not people” and stop building coal plants.