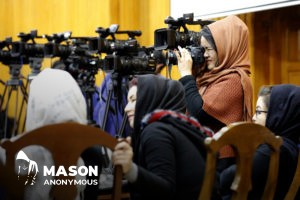 Noting that “words must never be met with violence”, Tadamichi Yamamoto, Special Representative for Afghanistan and head of the UN Assistance Mission in Afghanistan (UNAMA), called on the threat to be rescinded, adding that “the only acceptable challenge to words is to advance a better argument”.

Mr. Yamamoto underlined that “international humanitarian law – which applies to all parties to the conflict in Afghanistan, including the Taliban – prohibits attacks against civilians at any time and in any place”.

And affirming that media workers are also civilians, he highlighted the importance of protecting their “fundamental rights to operate in an environment free from any threat, intimidation or undue pressure by any outside entity, including governments”.

The UNAMA’s chief’s statement, in response to the public threats by Taliban to turn media outlets into military targets, highlighted two fundamental principles: that freedom of the press is critical, and that civilians should never be deliberately targeted with violence.

In the context of repeated threats by the Taliban, Mr. Yamamoto said that “press freedom in Afghanistan is earned at an unbearable cost”. The United Nations recognizes that Afghanistan is one of the most dangerous places for journalists to work. Official figures from cultural agency UNESCO’s observatory of killed journalists, shows that 16 died last year, and four so far this year.

The most recent UN report on protection of civilians during conflict in Afghanistan, shows that over 3,800 civilian women, children and men were killed over the 12-month reporting period.

Congratulating Afghanistan’s media workers for their reporting and continuing with their   duties in the face of escalating threats, Mr. Yamamoto added that the UN “remains steadfast in collaborating with national and international partners to protect journalists and to fight against impunity”.

He also reiterated the UN’s support to the Afghan government, “consistent with its international human rights obligations, to implement measures that improve journalist safety and that foster an open media, where no voice is silenced through fear.”

A new presidential election is scheduled for 28 September, which will be a “key moment to reaffirm the legitimacy of Afghanistan’s democratic political structure”, Mr. Yamamoto told the Security Council last week.

Last Wednesday, UNAMA’s chief told the UN Security Council he was “encouraged” by signs of progress during international mediation efforts which could lead to a lasting political settlement between the Afghan Government and the fundamentalist Taliban movement, which controlled the country prior to the 2001 invasion by coalition forces.