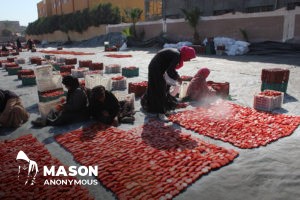 Four years since the international community agreed to implement the 17 Sustainable Development Goals – whose objectives include tackling food insecurity and poor nutrition – FAO says that a lack of progress “is the norm”.

In a new report focusing on Goals 2 (Zero Hunger), 6 (Clean Water And Sanitation), 14 (Life Below Water) and 15 (Life On Land), the agency also warns of unsuccessful efforts to make farming sustainable, as well as the long-term management of land and ocean-based resources.

The world is off-track to meet most of the Sustainable Development Goal targets linked to hunger, food security and nutrition.

According to the study, Sub-Saharan Africa and Oceania – excluding Australia and New Zealand – registered the lowest levels of investment in the agricultural sector, which includes fisheries and forests.

Key findings from the study that covers some 230 countries include data that more than 820 million people are going hungry around the world.

The percentage of hungry people has also slightly increased between 2015 and 2018, to 10.8 per cent.

Six in 10 livestock breeds ‘at risk of extinction’

Among the report’s other findings is the warning that 60 percent of livestock breeds are at risk of extinction in the 70 countries for which information is available.

This means that out of more than 7,000 breeds that are found in only one country, almost 2,000 are threatened, FAO says.

Examples include Fogera cattle from Ethiopia or Bali’s Gembrong goat, according to FAO.

It notes too that there has been “no progress” in conserving the animal DNA that would be needed to create new herds in case of extinction, with less one per cent of their genetic blueprint currently stored, with ongoing efforts to preserve these resources proving to be “inadequate”.

While there has been more success in conserving the genetic material of plants, with global stocks held in 99 countries and 17 regional and international centres totalling 5.3 million samples, FAO cautioned nonetheless that crop diversity is still too limited.

Investing in sustainable fisheries ‘is worth $32 billion annually’

Highlighting the need to invest in sustainable fishing, the report also warns that one-third of marine stocks are overfished today, compared with 10 per cent in 1974.

“Despite some recent improvements in fisheries management and stock status in developed countries, the proportion of stocks fished within biologically sustainable levels has decreased significantly in developing countries,” the UN agency says.

Around 30 per cent of countries still have a relatively low implementation record of key international instruments designed to combat illegal, unreported, and unregulated fishing, FAO maintains.

All countries should “urgently” implement transformational changes in fishery management and governance, FAO recommends, as rebuilding overfished stocks could increase annual fishery production by 16.5 million tonnes and annual revenues from fishing by $32 billion.

Among the report’s other findings are that water stress affects countries in every continent.

Nonetheless, the majority of countries that have registered high water stress since 2000, are mainly in Northern Africa, Western Asia and Central and Southern Asia.

In addition, between 2000 and 2015, the world lost an area of forest the size of Madagascar, owing mainly to agricultural use. Most of this loss was in the tropics of Latin America, Sub-Saharan Africa and South-East Asia.

On a more positive note, the rate of forest loss slowed down globally from 2010-2015, the FAO report notes, and this loss was partly compensated by the increase forest in Asia, North America and Europe.