Martin Griffiths briefed ambassadors in New York behind closed doors, but said in a tweet posted to his office account that he had “reiterated the importance of stopping the ongoing military escalation…He warned that recent developments jeopardize the progress the parties had made on de-escalation and confidence-building.”

In his briefing to #UNSC's emergency session on #Yemen, Griffiths reiterated the importance of stopping the ongoing military escalation before it's too late. He warned that recent developments jeopardize the progress the parties had made on de-escalation & confidence building.

The renewed fighting between Saudi-led coalition forces and Houthi rebels, formally known as Ansar Allah, has seen air raids stepped up northeast of the capital Sana’a, leading to many casualties amid fierce fighting, according to news reports, while rebels have reportedly gone on the offensive in Government-held areas, including a mortar attack which struck a market in the city of Taiz.

Reports suggest that fighting has escalated in three areas, in Nehm, close to Sana’a, the mountainous district of Jawf in the north, and the province of Marib, where a missile attack on a Government military base in the middle of January, reportedly left more than 100 dead. 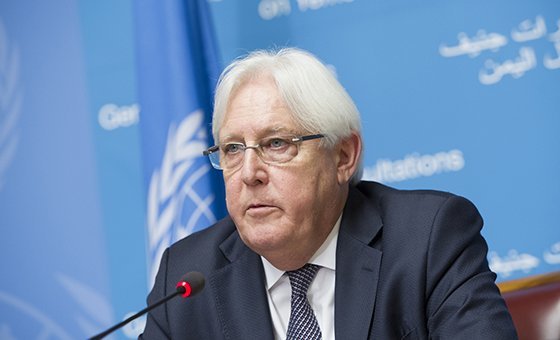 On Monday, Mr. Griffiths told the Guardian newspaper that “whoever started this renewed violence, it is unequivocally the case that there has been a huge rupture of confidence and a huge loss of life for the sake of uncertain territorial gains.”

He also tweeted that the focus must remain on the impact of nearly five year conflict on the country’s long-suffering civilian population noting that “the Yemeni people deserve better than a life of perpetual war.”

The escalation began just days after the Special Envoy had briefed the Security Council with a relatively upbeat assessment of how Yemen had emerged unscathed during the crisis provoked in the Gulf region by the killing of Iran’s top general, by the United States.

He said “no major acts of military provocation” had occurred, noting the previous week “had been one of the quietest weeks of the war in Yemen, since the war began, with only one airstrike, very limited military movement on the ground and no drone or missile attacks on neighbouring States.”

Meanwhile, the UN Children’s Fund UNICEF’s representative in Yemen, on Tuesday welcomed the release in Sana’a by Ansar Allah of 64 children allegedly captured during military operations.

“UNICEF hopes that this step also leads to the signing by the Ansar Allah of the Action Plan to end the recruitment and use of children in the conflict in Yemen”, the agency said.